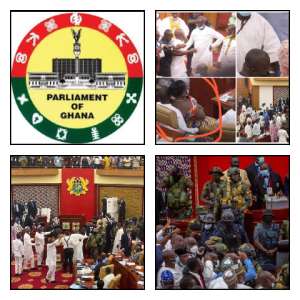 The rowdy nature of Ghana's eighth Parliament under the Fourth Republic has got many concerned citizens expressing their displeasure.

The near hung Parliament separated by an independent candidate Hon. Andrew Asiammah who later formed alliance with the New Patriotic Party (NPP) following the 137 members to either side of the aisle after the 2020 polls, Ghanaians expected a healthy democratic debate in this new legislature.

But happenings in the supposed august house since the plenary sessions on 6th January, 2021, into the days of passing the 2022 budget has got more advocates of democracy worried.

A veterinary doctor and aspiring politician who is a native of Goka and plies his trade at Drobo in the Jaman South District, Mr. Eric Yeboah Ignatius is one of the concerned Ghanaians who feels let down by today's Parliament.

According to Mr. Eric Yeboah, the beautiful personality profiles of the current composition of the legislative arm of government - young lawyers, seasoned debaters of the house, and steered by a veteran opposition Speaker, Rt. Hon Kingsford Alban Bagbin, should be the litmus test to Ghana's fledgling democracy; but the dastard scenes from there lately is so retrogressive to say the least.

Me Yeboah see no need for a debate on an important issue such as approving a budget turn into a near fisticuffs, with one member allegedly whisking the Speaker's seat away.

Adding that, "when last they (MPs) were electing the Speaker, some members were seen snatching ballot box, others kicking the box on the floor, with some stuffing ballot papers in their mouth, with soldiers deployed to calm down situations".

Though some may express it that the even split of the house by NDC and NPP portends such eyesore scenes, yet Mr. Eric Yeboah is reminding the honourables of the august house to know where they are coming from and the desires of the people they are representing.

Since Ghanaians believe in jaw-jaw than war which has guarded the country's democracy til date to the envy of our unstable neighbours, the concerned citizen says he will not remain a spectator, but bemoans the ramifications of the actions of the members if they don't heed to wise counsel for cool heads to prevail.