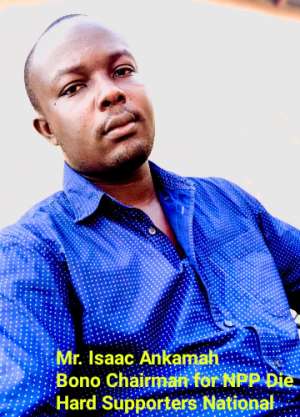 Following the tussle over the approval of the 2022 budget tabled in Parliament by the Finance Minister Ken Ofori Atta, the Bono Chairman for NPP 'Die Hard Supporters National' has spoken against the actions of the Minority group.

Chairman Isaac Ankamah is trying to get his head around why the National Democratic Congress (NDC ) members of Parliament have taken such entrenched position on the budget, and are not willing to meet the government half way through to allow Ghanaians reap the benefits the budget promises.

In his view, Mr. Ankamah who hails from Goka in the Jaman North District of Bono region and the CEO of Kofanki Investments base in Sunyani, Ghana will progress if the Minority members see the benefits Ghanaians will enjoy from the 2022 'Agyenkwa' Budget.

Democracy, he averred is meant for jaw-jaw, not war especially when an important decision must be taken.

However, the Bono Chairman noted that the latter is the case in this eighth Parliament under the Fourth Republic citing the plenary sessions of the Parliament where blows were virtually exchanged, and the present days of walkouts and the minority unjustifiably accusing the Majority of presenting an imposter in MP Adwoa Sarfo during the budget approval.

Judging by the projected accruals upon the approval of the budget, roping in the highly fought off E-levy by the opposition, the 'NPP Die Hard Supporters' Chairman believes if Ghanaians were to side with the ruling government and pay their tax, Ghana will reach the promised land soon, and will gradually wean itself from aide dependency.

NaBCo trainees hit the streets of Accra to demand payment of...
58 minutes ago