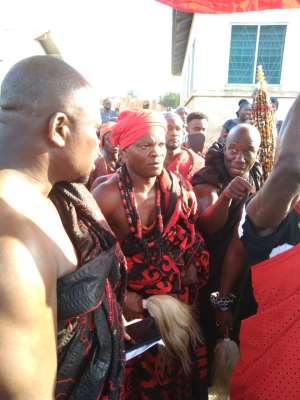 The Fodome Traditional Area, for some inexplicable reason, had got along without Awafia as against the citizens’ anticipations of seeing an immediate successor when the previous occupant of the stool, Togbe Adipa I, passed away 25 years ago.

The urgency of filling this vacant stool and all others came at the back of the Paramount Chief of Fodome Traditional Area’s resolve to form the administration required by law towards effective operationalization of the newly inaugurated Traditional Council in Fodome to foster peace and development.

Regarding the customs of Fodome, the Awafia is a venerated chief who engineers peace, superintends over wars, and oversees military logistics on behalf of the Paramount Chief.

In a bygone era, the Awafia’s authority legitimized him to set up and head paramilitary groups that comprised citizen-warriors. As chief, the Awafia was charged with the duty of seeing over the security of the town, provide intelligence, and again maintain social order as the occasion demanded.

Besides, the function of Awafia extended beyond military professionalism, since his position accorded him a rare privilege to act as the gatekeeper of economic activities, as he was entrusted with the indigenes’ keys of trade and entrepreneurship.

Togbe Adipa Wuah II was sworn in as the new Awafia of Fodome after exchanging oath with Togbega Gbedegbleme Akpatsa II, the Paramount Chief of Fodome Traditional Area.

The colourful ceremony took place on Thursday, 2nd December 2021 in Fodome Helu amidst rituals and cultural parades to outdoor the new chief to the indigenes.

The new Awafia swearing in followed when the kingmakers of the Dugba Clan in Fodome Helu presented him to the chiefs, elders, and the people of Fodome for installation corresponding to customs and traditions of Fodome.

In private life, the 43-year-old royal is recognized as Mr. Alfred Denyo Anyormisi. Currently, he works with the Ghana Education Service as a school head. He is happily married and have three daughters.

In his inaugural address, the new Awafia thank the Dugba Clan and the indigenes of Fodome for preferring him to lead. He went on and remarked that, since we are in modern times, the threat that confronts the people of Fodome is a paucity of development and not a gun battle.

“My assumption of office comes in a new era in which gun battles are few. Now you have a new commander who is going to lead Fodome in wars of development.” Togbe Adipa Wuah II noted.

Togbega Gbedegblelme Akpatsa II, the Paramount Chief of the Area, addressing the gathering applauded all guests and citizens of Fodome for the diverse supports exhibited right from the time of confinement of the new Awafia to his outdooring.

He specified that the installation train has now moved from Fodome Helu to Fodome Agbesia, afterward to Fodome Tormegbe and then Fodome Agbetsido.

“Now Fodome Helu has accomplished the installation of chiefs to all its titled offices. We have installed the Senior Amankrado of Fodome, the senior Asafofia of Fodome and finally the senior Awafia of Fodome.” Togbega Gbedegblelme Akpatsa II admitted.

To that end, Togbega called on the three communities to begin immediate dialogues with the paramountcy to kick-start their enstoolment arrangements.

“Starting from January 2022, any of the three communities that would complete their facilitation of processes with Gbedegbleme shall have their successor chief installed.” Togbega Gbedegblelme Akpatsa II hinted.

Togbega proceeded and reassured that several developmental projects are in the pipeline for Fodome. And God willing, next year, the indigenes would appreciate the luck God has bestowed on Fodome because of the livelihood opportunities coming to the area. He appealed to everyone to remember Fodome in their prayers.

Finally, Togbega appealed to all his citizens to continue to comply with all covid-19 protocols. He invited them to take advantage of covid vaccine to protect themselves.