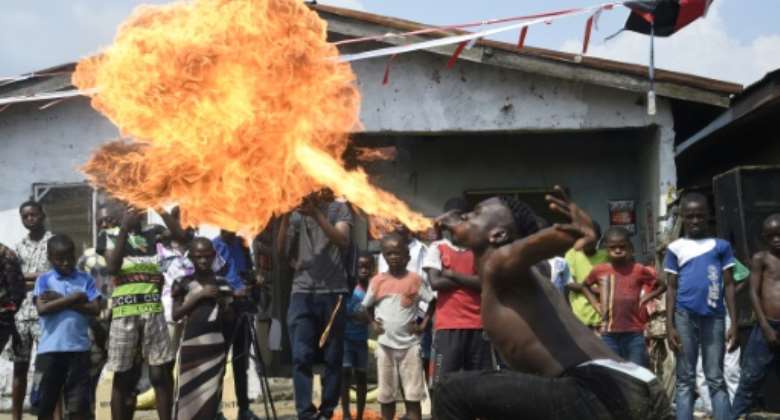 To the rhythm of drums, two plastic giants whirl and kick up dust in an alleyway in Orowonshoki, one of the poorer districts of Lagos, Nigeria's megalopolis economic capital.

From shanty houses of wood and tin, inhabitants poke their heads outside, and watch wide-eyed as the strange procession bounces past.

Soon, the whole street sways and joins the dancers, whose costumes are crafted entirely from plastic bottles collected from the neighbourhood streets.

The "Slum Party" kicks off with a burst of music, dance and the flames of a fire breathing act.

Some of the dancers were dressed in costumes made from plastic waste. By PIUS UTOMI EKPEI (AFP)

For three years, a collective of 10 young Nigerian performers has sought to improve the lives of Orowonshoki's residents through dance, hoping to change the reputation of an area once blighted by gang violence.

"In 2019, Orowonshoki was facing a lot of security challenges, and no one was going out in street anymore," said Valu, one of the creators of the "Slum Party" that is held once a year.

Throughout the year, the collective organises dance workshops for children and fitness activities for women in the district.

"I just used to stay all day long with my kids at home, but now because of them I do something different, I feel like I exist," said Martha Eze, 37, who dances later in the party.

Wealth next to poverty

Orowonshoki is located at the foot of the Third Mainland bridge, Africa's second largest, that stretches 12 kilometres above the Lagos Lagoon.

The professional dancers hope the performances and courses they run slowly change the district. By PIUS UTOMI EKPEI (AFP)

In sub-saharan Africa's largest city where one in two residents lives in poverty, wealthy island districts with swank fashion and restaurants are a world away from the poor mainland districts like Orowonshoki.

In the distance from Orowonshoki across a stretch of the waterways surrounding Lagos, residents can see Banana Island, an exclusive, private Lagos enclave of villas and residences.

In Orowonshoki, the only dollars visible are those printed on the shirt of a teenage boy wiggling his legs to "Peru", a song by Nigerian singer Fireboy.

"I'm in San Francisco jamming... I just arrived from Miami," the children sing along to the lyrics dancing barefoot.

Even one of the city's daily power cuts that stopped the music dead did not spoil the party: the audience kept dancing.

"We have a lot of fun today, I love dancing," said Beke Olamileken, a 16-year-old boy who dreams of becoming an actor.

More than a simple performance, organisers also see "Slum party" as a tool for political awareness.

Lagos is a city of wealth but also massive poverty. By PIUS UTOMI EKPEI (AFP)

"I want to show that you can make a difference with simple actions on the ground," Valu said.

Last year, a video showing Valu dancing in a huge mud puddle in front of a police officer to denounce the disastrous state of the roads, was a hit on social media.

During the "Slum party", next to the dance floor, on the steps of a ruined house, the collective planted cardboard gravestones, inscribed with the words "People", "Wealth", "Rights", "Security" and "Peace".

Dancer Henry Bethel Wisdom ties his body with an orange rope, and improvises a performance that freezes the crowd. The artist soars into the air, trying to get out of the improvised cemetery, but is caught by his associates who drag him back with rope.

None of the dancers makes any reference to it, but the performance recalls the massive protest movement against police violence that gripped southern Nigeria in October last year.

Cooks in masks prepared food for dancers and guests during the Slum party. By PIUS UTOMI EKPEI (AFP)

Thousands of young people took to the streets to demand an end to human rights abuses and corruption, before being suppressed by the security forces.

"We feel like we are slaves of our government, what we need is security wealth and peace," said Olamide Ballyqueen, one of the dancers.