2022 budget: Work together just as you do when it comes to ex-gratia matters – SEND Ghana to MPs 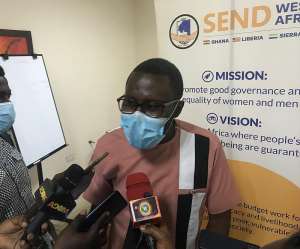 Advocacy group, SEND Ghana is unhappy with the standoff between the Majority and Minority in Parliament on the approval of the 2022 Budget Statement and Economic Policy proposal of the ruling government.

The past week has been an eye-saw in parliament where Members of Parliament belonging to the New Patriotic Party (NPP) and the National Democratic Congress (NDC) clashed over the approval of the 2022 budget.

Exactly a week ago, the Minority in the absence of the Majority succeeded in rejecting the budget presided over by Speaker Alban Bagbin.

Outraged by the decision taken, the Minority on Tuesday, November 30, also had their way to approve the 2022 budget in the absence of the Majority when First Deputy Speaker Joseph Osei-Owusu acted as Speaker.

With the controversies the two incidents have created, the fate of the budget is currently hanging with no clear indication of when the impasse between the NPP MPs and the NDC MPs will be resolved.

Waving into the standoff between the two groups in parliament, SEND Ghana says it condemns the actions of both the Majority and the Minority.

“We are so much concerned about what is happening between the two big parties in parliament on the budget. I think that our politicians should put all sorts of partisanship aside when it comes to national interests like the budget.

“We need this to move on with our development come January and if you are doing NPP, NDC, it doesn’t help us. So we do not support what the NPP did last Friday and neither do we support what the NDC did on Tuesday,” SEND Ghana Deputy Country Director Dr. Emmanuel Ayifah told the media on Thursday during a sectoral budget forum on the 2022 budget statement and economic policy.

Dr. Emmanuel Ayifah further said the Majority and Minority must settle all issues and work together on the 2022 budget just as they do when it comes to matters relating to ex-gratia.

He said the budget is of national interest and hence all partisan issues should be put aside for the benefit of the country.

More Headlines
ModernGhana Links
You have collapse the economy, now you want us to pay E-Levy; forget it – Mahama to Akufo-Addo
No discussions on E-Levy in Parliament this week
A/R: Police mount special ‘Bush Operation’ to arrest robbery gang that killed gold buyer
The world has changed; gov’t anticipate e-Levy will be permanent tax - John Kumah
Mahama Ayariga demands action against persons fueling Bawku tensions on social media
No way, the Minority I lead will never accept E-Levy in its current form and character – Haruna Iddrisu
Okada is killing too many people; let’s stop politicising its use and enforce the laws – Prof. Dodoo
Special Prosecutor begins probe into financial sector clean-up
Parliament to resume sitting today
TOP STORIES

You have collapse the economy, now you want us to pay E-Levy...
43 minutes ago