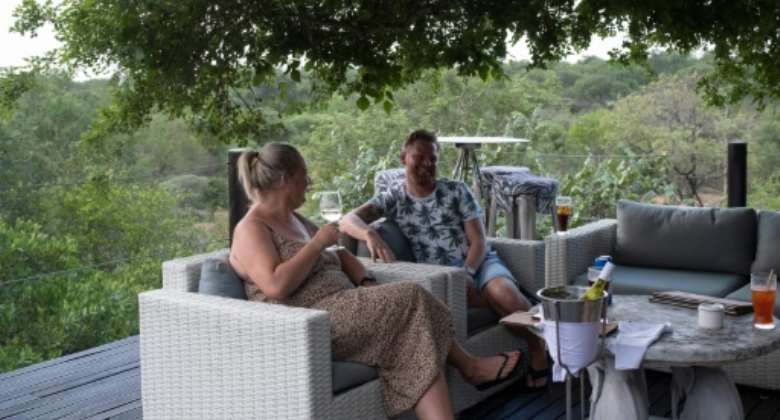 Sabine Stam didn't expect to have her feet up, sipping white wine on the deck of a half-empty safari lodge near South Africa's Kruger National Park.

Her tour company was full of bookings for the December peak season. Then Omicron came.

First reported by South African scientists to the World Health Organization on November 24, Omicron has since unleashed global panic, as countries rush to shut their borders, reimpose travel restrictions and ramp up vaccination programmes.

Stam, 36, scrambled to rush a dozen European tour parties already in South Africa back to Belgium and Holland, her main market along with Britain and the United States.

Since then, she's struggled to convince hundreds of cancelling customers to postpone rather than ask for refunds.

The Omicron variant has unleashed global panic, as countries rush to shut their borders. By Wikus de Wet (AFP)

"It's quite a kick in the nuts... and maybe the last for a lot of businesses here," she said, overlooking a pond that lures wild animals to delight guests.

"Last year it was easy for clients to postpone because nobody really knew what was going on," she told AFP.

But now "everyone is too scared to set a new travel date".

'Thinking out of the box'

Snowbirds from the northern hemisphere normally flock to South Africa's austral summer. Before the pandemic, in 2019, tourism was 6.9 percent of South Africa's economy.

Last year it plunged to 3.7 percent, as foreign arrivals dropped 71 percent. Hopes of a rebound this year seem dimmer now.

The Khaya Ndlovu Manor House, one of many high-end lodges near the famed Kruger National Park, opened its restaurant and safaris to everyone when Covid restrictions first eased.

Before the pandemic, in 2019, tourism was 6.9 percent of South Africa's economy. By Wikus de Wet (AFP)

With around 70 percent of guests coming from Europe and the United States before the pandemic hit, the lodge also cut prices by almost half to align with local budgets.

"We managed to stay afloat thinking out of the box a lot," said sales manager Shannon Maclean, greeting guests from the bar as she oversaw preparations for the evening.

Less than half the beds were booked for the night, mainly by South Africans doing business with nearby citrus farms.

Staff had been upbeat about the end of 2021 as international bookings picked up in September.

The lodge recently hosted two weddings and a 40th birthday with guests from abroad. They had been preparing for another destination wedding when the latest travel bans landed.

'Back to square one'

"It was so nice to hear international accents again and stories from far away... how their lockdowns worked," Maclean sighed.

"Now it seems like we are almost back to square one."

With all international bookings cancelled for the first half of December, Maclean was concerned about the knock-on effect on other businesses.

Food suppliers, airport transfers, and guides are all suffering as a result, she said.

South Africa's tourist industry has been particularly hard-hit by the pandemic.

The country worst-affected by coronavirus in Africa -- with almost three million recorded cases -- was shut for most of 2020 then blacklisted at the end of last year over the discovery of another variant.

Britain, a major source of foreign visitors, only took South Africa off its travel "red list" at the start of October.

It was the first impose a flight ban when Omicron surfaced.

The variant has since been detected in more than two dozen countries, although France announced a partial resumption of flights from South Africa this weekend.

But Omicron has seen daily caseloads roughly doubling every day all week, raising concern among health officials ahead of the festive season.