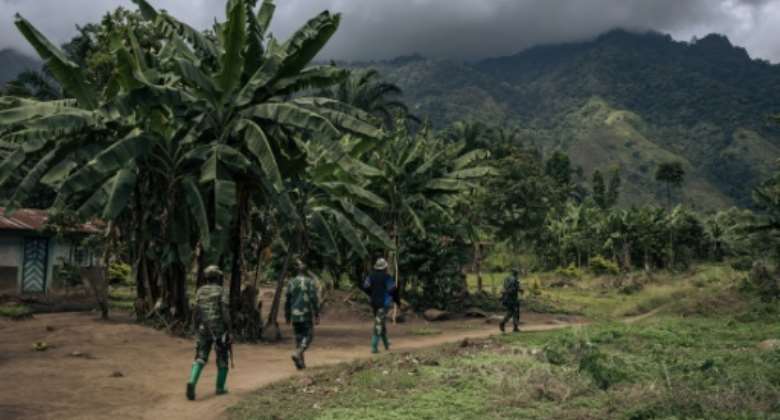 A Congolese army patrol pictured in May in the mountainous Rwenzori sector near the Ugandan border, which has suffered many ADF attacks. By ALEXIS HUGUET (AFP)

Uganda sent more troops and equipment, including armoured vehicles, into eastern DR Congo on Thursday, witnesses at the border said, on the third day of an operation against the ADF rebel group.

"At around 4pm, we saw another Ugandan army column cross," freelance journalist Tony Kitambala said at the Nobili border post.

"They're in armour-plated vehicles, and there are also water tankers."

A video filmed by another resident showed two light infantry tanks in the convoy.

Ugandan soldiers were first seen crossing there into North Kivu province on Tuesday, hours after their armed forces launched air and artillery strikes from Ugandan territory.

The two countries militaries said that special forces from both armies were continuing to search the area that had been targeted in Tuesday's air and artillery strikes.

The target is the Allied Democratic Forces (ADF) -- a group blamed for massacres in eastern DRC and attacks in the Ugandan capital, and which the Islamic State group claims as an affiliate.

The group established itself in eastern DRC in 1995, later becoming the deadliest of scores of outlawed forces in the troubled region.

DR Congo's Catholic Church says the ADF has killed around 6,000 civilians since 2013 while a respected monitor, the Kivu Security Tracker, blames it for more than 1,200 deaths in the area alone since 2017.

Uganda moved against the ADF after accusing it of a string of recent attacks on its soil that have been claimed by IS.

Its operation has been approved by Kinshasa, whose armed forces have been struggling against the ADF for years.

A Congolese military source, speaking on condition of anonymity, said Ugandan President Yoweri Museveni's son, General Muhoozi Kainerugaba, was leading the operation on the Ugandan side.

The MONUSCO chief said during the meeting he had no "objections" to the joint Uganda-DRC operation, the ministry reported.

A spokesman for the UN force, Mathias Gillmann, on Wednesday stressed the need for strong coordination between all sides.

Niger's ambassador to the United Nations, Abdou Abarry, urged support for the deal between Kampala and Kinshasa. Abarry is also the current president of the Security Council.