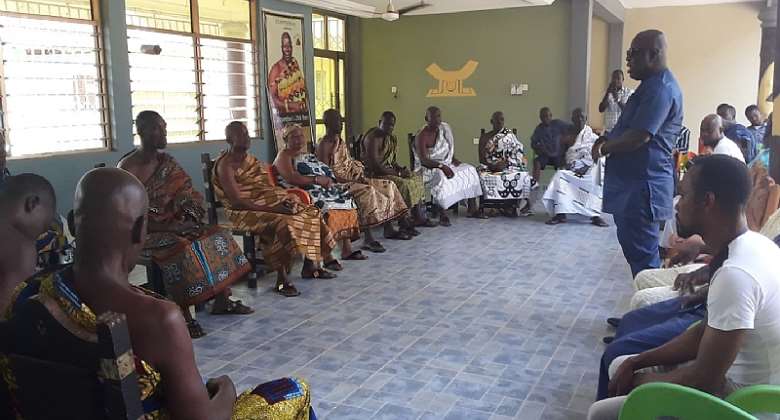 The Atebubu-Amantin Municipal Chief Executive Hon. Edward Owusu has met members of the Amantin traditional council to deliberate on issues affecting the development of the community and to chart a way forward.

The MCE enumerated a number of projects undertaken in the last four years of which some have been completed and others at various levels of completion.

He pledged his administration’s preparedness to complete some outstanding projects namely the mechanization of 4 boreholes, 2 three unit classroom blocks, expansion of street lighting project and the construction of a drainage system.

Hon. Edward Owusu touched on a World Bank facility under which a modern market will be provided for the community together with the construction of roads linking Amantin to neighboring communities such as Dauda, Kojo Kuma and Yaw Tuffuor in the next three years.

He pleaded with the council to support the municipal assembly in its revenue mobilization drive promising that funds accrued from the community will be dedicated to the development of Amantin.

Members of the council led by the Akwamuhene Nana Kofi Amoakohene who also chaired the function made various suggestions aimed at accelerating the development of Amantin which they described as ‘deprived’.

They outlined a number of problems facing the community which include water, street lighting inadequate rubbish containers, unplanned physical developments and lack of accommodation for the Abamba CHPS compound.

Most contributors spoke strongly about challenges facing the Amantin senior high school touching specifically on the non-availability of a fence wall, lack of a storeroom, leaking roof of the girl’s dormitory and the inadequate number of security personnel for the school.

Others touched on the need to upgrade the health center into a clinic to ensure the delivery of better healthcare to the people.

The meeting prioritized the mechanization of four existing boreholes, the construction of a modern market and the provision of requisite facilities for the Amantin Senior High School for the immediate attention of the municipal assembly.

Present was Hajia Fati Saaka the municipal coordinating director and various heads of department from the municipal assembly some of whom addressed issues bothering the minds of members of the traditional council.