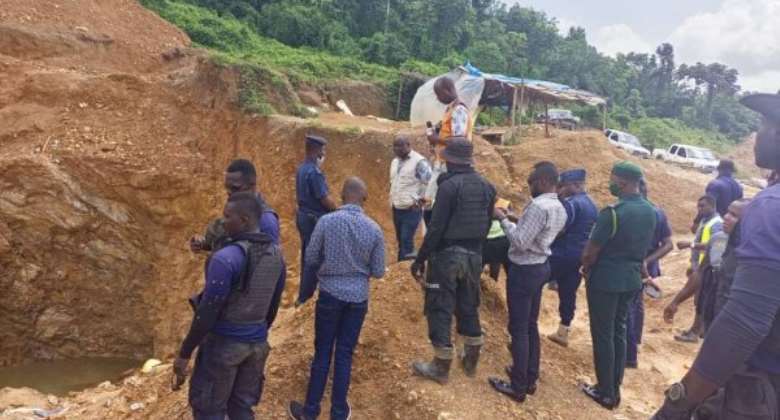 Municipal Chief Executive (MCE) of Prestea Huni-Valley, Dr Isaac Dasmani, has paid a visit to the elders and bereaved families of the nine persons, who died on Thursday in an illegal mining pit at Atros near Wassa Essikuma in the Western Region.

Dr Dasmani expressed his sympathy to the grieving family at Wassa Essikuma and visited the incident site.

He was accompanied by members of the Municipal Security Council (MUSEC), chairperson of Minerals Commission Board and the former Member of Parliament for Prestea Huni-Valley constituency, Mrs Barbara Oteng-Gyasi, some New Patriotic Party constituency executives and members.

He said the illegal mining activities usually ended in tragedy and that was why the government introduced community mining to regulate their operations.

He appealed to stakeholders to present their land documentation to the Minerals Commission and other regulatory institutions and to his office to enable him to lobby if they could have community mining in Wassa Essikuma.

The MCE assured the people of Wassa Essikuma that the Assembly would put in place measures to avert such incidents from occurring in future.

He said investigations conducted so far revealed that those who survived had gone into hiding with the view that they would be arrested and prosecuted.

"We would not apprehend you so please come out of your hiding place to help the police know the actual number of victims who were in the pit," he indicated.

Mrs Oteng-Gyasi promised to share an operational manual on community mining with the citizens of the Prestea Huni-Valley constituency to enable them to have fair insight into the programme.

The Abusuapenyin of Wassa Essikuma Kwabena Poku and the queen mother Obaapanyin Pokua thanked the MCE and his team for mourning with the community in this painful moment.

They pleaded with the MCE to liaise with the appropriate authorities to ensure they release the bodies of the deceased to the families on time for burial.