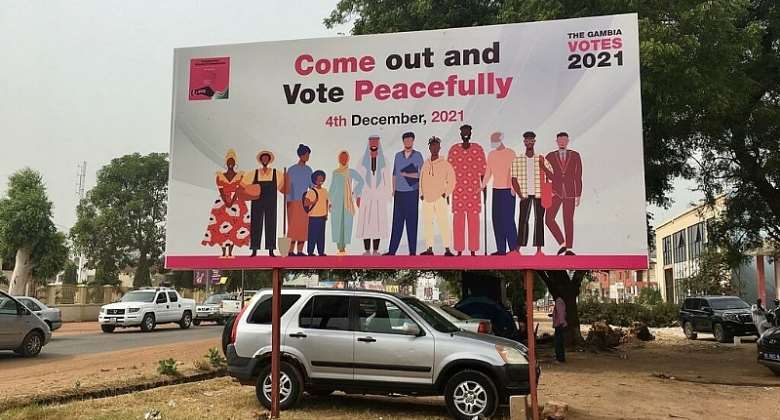 The Gambia's presidency is up for grabs, with the youth vote playing a pivotal role in the 4 December vote – where former dictator Yahya Jammeh still has support, despite living in exile in Equatorial Guinea, accused of rights abuses.

President Adama Barrow is seeking re-election, but with his own NPP party and on a fractured ticket. The transitional president, who said he would step down after three years and not run again, made a surprise announcement when his new NPP party said he was joining forces with Jammeh's APRC party.

There are questions surrounding whether Barrow should be allowed to run at all.

Meanwhile Jammeh's stamp on the country is everywhere. His face still on the Gambia's dalasi currency, and his heavy-handed tactics revealed by eyewitnesses and perpetrators during the Truth, Reconciliation and Reparations Commission (TRRC) culminated in a report that currently sits on Barrow's desk.

“Of course they had an alliance," says Gambian political analyst Sait Matty Jow. "But later Jammeh– known as the supreme leader of the APRC – came out and said he did not endorse the alliance.”

This move divided the party, with senior leadership who served in government going with Barrow, while the others moved towards Jammeh's, camp and that of another candidate, Mama Kandeh – who represents Jammeh voters.

Kandeh, of the Gambia Democratic Congress (GDC) party, ran in 2016, winning more than 15 percent of the vote. He's broadcast Jammeh on speakerphone at his political rallies, drumming up support through the exiled leader.

“Jammeh still has considerable support in this country," says Jow, University of Gambia political science lecturer. "But it's not support that can win him elections."

Former TRRC prosecutor Essa Fall has also put his hat into the ring. The TRRC has documented the human rights abuses, murders and disappearances under Jammeh, who ruled the West African country with an iron fist for 20 years.

The lengthy report with recommendations was only submitted last week.

While a number of candidates continue to jostle to make the claim as the "youth candidate", it's the older voters who typically come out to vote in The Gambia, according to Jow, and they have earmarked their candidate: President Barrow.

“There are quite a number of Gambians, especially the older generation, that think everything is ok with Barrow, that he's peaceful, he's not disturbing anybody, and this makes our election kind of complicated in a way,” says Jow.

The most contentious issue for young people is the lack of jobs, which is the case for Mustapha, 28, from Tujerong.

“I need a job, and I think my candidate will give me a job,” he says, looking at the sticker of UDP party candidate Ousainou Darboe on his truck.

Old people don't need jobs, however, and it is not a narrative that they would focus on when considering candidates.

“So while young people are looking for change, the older generation usually come out to vote more, and want to maintain a system … and they are looking at Barrow from that angle,” says Jow, adding that some call in to radio talk shows and say he's brought peace to the country.

Their point of measurement is Jammeh, the former iron-fisted president, where numerous human rights violations were committed during his 20 years in power, including murders, rapes, and disappearances.

“He's not disturbing anybody, he's not arresting anyone, so they're comparing him in terms of the human rights violations with Jammeh where everyone was scared and living in fear,” says Jow, who also works as executive director for the Center for Research and Policy Development.

Voting on ethnic lines, a policy that Jammeh endorsed during his tenure, it is not an issue in this election, according to Jow.

“The problem we have in this country is that there's this narration and accusation of tribalism and all those things, but there's no party that can win an election here based on one sole tribe, and that's been the case. There's no one absolute majority in terms of tribe,” says Jow.

The former president labeled some parties according to the ethnicity of their leader, such as labeling the UDP party as Mandinka, especially during the 2016 election. The political analyst says that Barrow is using the same strategy to create division in the vote.

“The problem with our politics is sometimes you feel that the issues aren't as important as the personalities, but when you talk to these civil society organizations, many Gambians are frustrated because of the lack of transition,” says Jow, adding that Barrow promised change but did not deliver it.

The constitution was key for many Gambians, to change from a dictatorial-style document to a working, current basis for The Gambia, including setting term limits and limits on presidential powers. The new draft constitution was voted down in September 2020.

“If you look at this country today, people have moved forward. But it seems that institutions are still stuck in the Jammeh days,” says Jow, adding that the next president will most probably be transitional, which wastes time.

The Gambia vote works on the 'first past the post' system, meaning that the candidate who receives the most votes wins.

“This is the most opening and challenging election we will have – it's high stakes and I think it will be a very close call, even though UDP and NPP are being termed as the leading candidates,” says Jow.

He considers it an open field in terms of who will win, and voters can change their minds. According to his analysis, many are still deciding who to vote for.

But the obvious change is that Gambians are free to talk about politics, to make their own decisions, and to consider all their options, unlike the Jammeh years, he says.

“At least people are very free in terms of picking a candidate, and in terms of the campaign, no one is hiding, compared to Jammeh's time. I am so excited about this election,” he says.

UTAG Strike : All 15 branches to continue strike
35 minutes ago