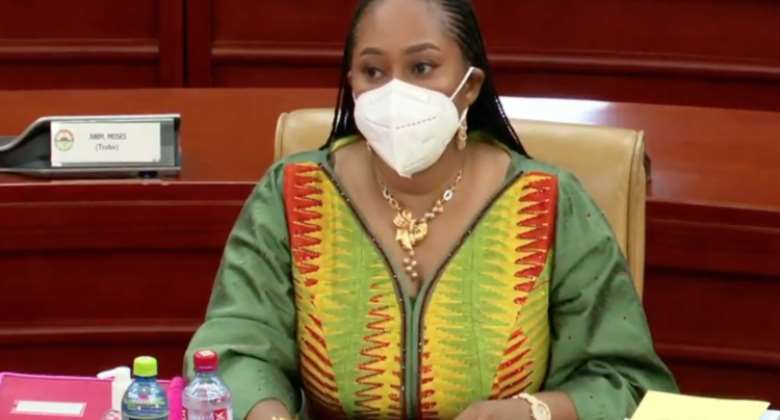 A Personal Assistant (PA) to the Member of Parliament for the Dome Kwabenya Constituency, Nana Reuben Kwapong, says the legislator returned to Ghana on Saturday, November 26, 2021.

He said she was before Parliament without the minority side to approve the 2022 budget statement on Tuesday, November 30.

Speaking on the Point Blank segment of Eyewitness News on Wednesday, December 2, 2021, Mr. Kwapong debunked allegations that an imposter turned up in her stead last Tuesday in order to ensure the Majority Caucus successfully overturned the rejection of the 2022 budget.

“She [Adwoa Sarfo] was outside the country. She came back on Saturday,”. Unable to state whether it was Saturday dawn or morning, he said. “The bottom line is she left the United States and got to Ghana on Saturday [November 26]”.

He also indicated that the Dome Kwabenya MP was in Parliament on Tuesday and only interacted with the Afigya Sekyere East MP, Mavis Nkansah-Boadu.

“You can find out from Hon. Mavis Nkansah , they were together in Hon. Sarah Adwoa Safo’s Parliament office.”

According to him, the MP did not participate in any meetings on the day, and that to the best of his knowledge, she moved from the office straight to the Chamber.

“She came straight from the house to the office. She was there throughout till she came into the chamber.”

But NDC Member of Parliament for North Tongu, Samuel Okudzeto Ablakwa, says his side is not convinced.

He thinks there are so many inconsistencies with the account of the P.A.

He is bent on getting to the button of the matter.

“Very soon, we will put out all the details we know so far about the incident; which are very troubling. Very soon we will know and get to the bottom of the matter and Ghanaians will know the truth whether she was in the chamber or not. But safe to say, we are not convinced, so far the contradiction is one too many, and it is important to state that, this should not be reduced to womanhood or how to dress as a woman at all. It is a needless distortion. That is not the issue at all”, Mr. Ablakwa said.”

It emerged on Tuesday, November 30, 2021, that Sarah Adwoa Safo has been absent from Parliament for some time now following an extension of her leave which was granted by the President.

The allegations are that she was impersonated during the proceedings on Tuesday because the Majority side needed the numbers at all cost to approve the government's 2022 budget, which they did despite the disapproval by the minority side.

The controversy was deepened by the fact that videos and photos of a woman believed not to be the Dome Kwabenya MP in Parliament went viral on social media.

In the said viral video, the woman was seen wearing a nose mask, leaving the chamber right after the headcount which led to the approval of the budget statement.

However, on Wednesday, Madam Sarah Adwoa Safo appearing with a different hairstyle did not wear a nose mask.

Adwoa Safo dismissed Okudzeto Ablakwa's claims, saying “I cannot force Hon. Okudzeto Ablakwa, who is my friend on the other side, to dress the way I want him to dress, that is an insult to womanhood so those making that noise should withdraw.”

Shortly after her message in Parliament, the Minority Chief Whip, Muntaka Mubarak, indicated that his side will establish the truth of the matter.