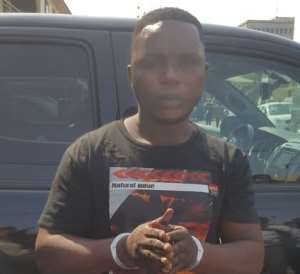 The Accra Regional Police Command has arrested Emmanuel Owusu, a 27-year- old vehicle mechanic for allegedly snatching an unregistered Toyota Tacoma vehicle from its owner at North Legon in Accra.

The Accra Regional Police Commander, DCOP Iddi Seidu, who briefed the media on the arrest, said the vehicle was being offered for sale by the owner when the suspect called to express interest.

He said the suspect met the owner on November 26, 2021, to test-run before payment.

“In the course of the test-run, the suspect bolted with the car leaving the owner behind,” the Commander said, adding that the car, which was fitted with a tracker, enabled the Madina Police who had been informed about the theft to dispatch rover teams to track it.

He said the suspect was arrested at Dome with the vehicle as he was on the verge of selling it to a buyer.

“The command extends a word of caution to prospective vehicle buyers as well as sellers to take note of their security before patronising or offering a vehicle for sale.”

He also advised vehicle owners to ensure that their cars have trackers to protect it from theft.

The suspect has provisionally been charged for conspiracy to steal and stealing, and is being prepared for court.