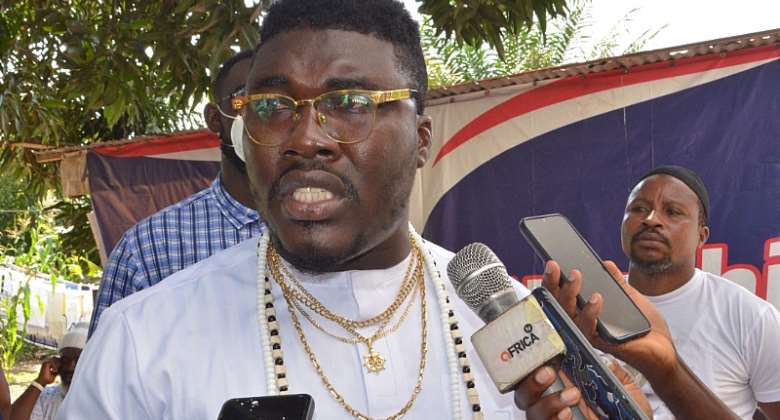 The Municipal Chief Executive Officer of Ledzokuku Krowor Municipal Assembly Mr Mordecai Quarshie has paid a courtesy on the Teshie Traditional Council to formally introduce himself.

According to him, the Teshie Traditional Council led the Original Nii Martey Laryea I, Oblahiaa Mantse of Teshie Gbugblan Quater to play a strong role to ensure he gets 100 per cent votes from the Assembly Members as President Akufo-Addo's nominee.

"Let me use this medium to thank the leaders of the traditional council especially Original Nii Martey Laryea I for his unflinching support towards my confirmation as the MCE. I'm here today to show appreciation to the elders for their support from day one up till now," he stated.

Mr Quashie noted that the entire members of the Traditional Council accepted him as a family member and supported him in prayers.

The Oblahiaa Mantse of Gbugblan Original Nii Martey Laryea I in his remarks commended the Municipal Chief Executive Officer Mr Mordecai Quarshie for the steps taken.

"Let me commend the Municipal Chief Executive Officer Mr Mordecai Quarshie for coming to us to show appreciation of what we did to support him when he called on us before his confirmation," he stated.

He however appealed to the MCE to tackle sanitation issues as his priority and also help provide a better drainage system for the people of Teshie.

The Oblahiaa Mantse Nii Martey Laryea I emphasised the need for improved revenue collection in the area considering the numerous resources Teshie is endowed with.

He noted, "people used the public the public cemetery without paying but it can be one of the places where the assembly could generate revenue for the development of Teshie if it is fenced and properly maintained".

The Municipal Chief Executive Officer Mr Mordecai Quarshie in an interview on the sidelines mentioned sanitation, security as some of the areas the assembly would tackle.

Residents of Settlement unhappy over destruction of road in ...
53 minutes ago