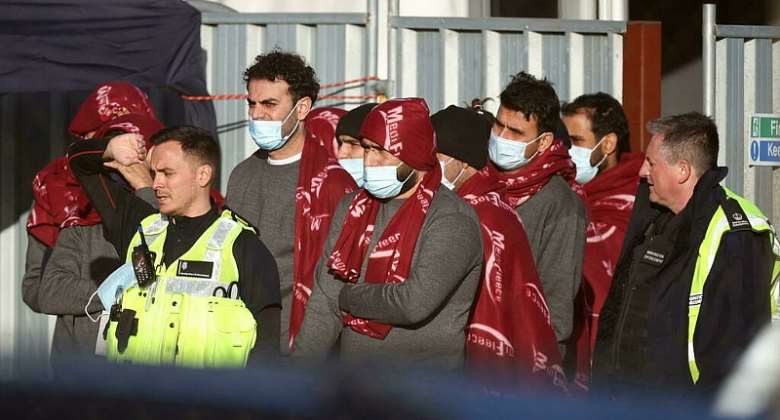 Britain and Belgium have promised to cooperate more closely to tackle irregular migration, after 27 people died when their dinghy capsized as they tried to cross the Channel last week.

The pledge is part of a wider bilateral deal signed by prime ministers Boris Johnson and Alexander De Croo after a virtual meeting on Tuesday, the government in London said.

It came after Britain was prevented from joining a meeting of European interior ministers last weekend to try to crack down on people-smuggling gangs behind the crossings.

Frozen out of the talks, London has embarked on its own efforts to tackle the issue with Home Secretary Priti Patel reported to be planning a tour of European capitals.

London and Brussels promised improvements in detecting and stopping irregular migration at the Belgian port of Zeebrugge, and along the Belgian coast.

Small boats
They also pledged to "improve joint working on illegal flows, including to disrupt human trafficking and human smuggling networks and prevent loss of life".

The two countries also said they would work with others to secure closer cooperation on "small boats in order to prevent illegal sea crossing towards the UK".

That included trying to stop "secondary movements" of migrants with the Schengen free-movement area of the European Union, they added.

The British government is under pressure at home because of the record numbers of migrants crossing the Channel from northern France this year.

French outrage
Johnson's pitch to leave the EU in 2016 was based on "taking back control" of Britain's borders, but doing so now Britain is out of the bloc has proved more problematic.

Patel's invitation to the talks was withdrawn after French outrage at a British suggestion that migrants are sent back to the EU and that France forces boats back to its coast.

The Times newspaper on Wednesday reported that the interior minister was planning to visit her counterparts in Italy, Belgium, and Berlin to try to solve the crisis.

Patel's department declined to comment on her travel plans when contacted by AFP.

But a spokesperson said: "The government will continue to push for greater cooperation with all European partners."