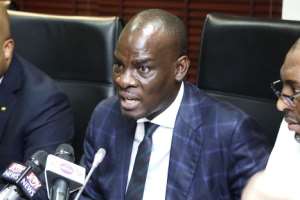 The decision by the First Deputy Speaker of Parliament Joe Osei Owusu to throw out a motion for the rescission of the approved 2022 budget statement has been met with contempt by the Minority side of the House.

On Wednesday, December 1, 2021, the Minority moved a motion requesting that, the approval of the 2022 budget should be set aside.

The caucus maintained that processes used for approving the budget were in violation of the Standing Orders of Parliament and the 1992 Constitution. But the Majority Caucus disagreed.

However, after a lengthy debate on the motion, the First Speaker, Joe Osei-Owusu, in his ruling explained that per the Constitution and the Standing Orders of the House, he together with the Second Deputy Speaker are members of Parliament but only to assist the Speaker of Parliament when the need arises.

He insisted that he was therefore not wrong in associating himself with the Majority side to approve the 2022 budget despite sitting in as the Speaker, and thus shot down the Minority’s request.

“I am a member of Parliament the Second Deputy Speaker is also an MP and our role is to assist the Speaker in managing the house. So any attempts to read and interpret the constitution to include the deputy speakers is a misreading,” he said.

Shortly after this, the Minority held a media briefing, registering its displeasure over the turn of events.

The Minority was not enthused about the Speaker’s decision because he made a ruling himself instead of giving MPs the opportunity to vote on the motion.

“The First Deputy Speaker simply abandoned putting a question on the motion and opted to give a ruling. You don’t rule on a motion, the motion was accommodation, it was seconded and debated. All he needed was for the house to decide, but they knew that on their side they did not have the numbers,” Minority Leader, Haruna Iddrisu said.

Akuffo-Addo's reaction to calls for a reshuffle is disappoin...
32 minutes ago