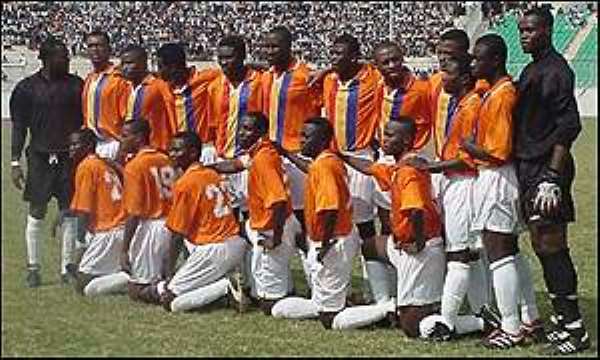 Accra, July 19, GNA - Struggling defending league champions, Accra Hearts of Oak, on Saturday ended the club's three successive drawn games when they beat Okwawu United 2-1 in a ninth-week clash of the Kinapharma Premier League at the Accra Sports Stadium. Debutant Acquah Harrison won the day for Hearts when he soared above his markers to nod home the winner from a Bernard Don Bortey's lob in the 81st minute. Ginger haired Bortey's set the Phobians on the winning way with a fifth minute immaculate free kick which, zoomed straight into the net, but their celebration was short lived as defender David Mensah put Okwawu on level pegging nine minutes later. Both sides stepped up their game in a bid to snatch the winner but Okwawu who were slightly on top lacked ideas up front to hit the back of the net.

Substitute Emmanuel Osei Kuffour who came on for young Eric Nyarko in the 70th minute could have score for his side against the run of play in the 79th minute but his effort was thwarted by the Okwawu defenders after going through a forest of legs. His inclusion in the game together with speedster Lawrence Adjei at the later stages, added some bite to the Hearts attack, which fetched the winner. The technical handlers of Hearts together with their vociferous fans sat on thorns after the match winner, as the "asase aban" lads launched an incessant pressure to redeem the deficit but alas, it did not materialized.

A signal for the end of the match by referee G. K. Zorve of Kumasi was greeted with a thunderous cheers by the Hearts fans most of whom scaled over the inner perimeter to celebrate with the team and to carry Harrison, the second goal scorer, who joined the Phobians from Power FC. Coach Sulley of Okwawu United attributed the defeat to lack of concentration by his boys. He said it was the first time most of his boys played before such a partisan crowd.