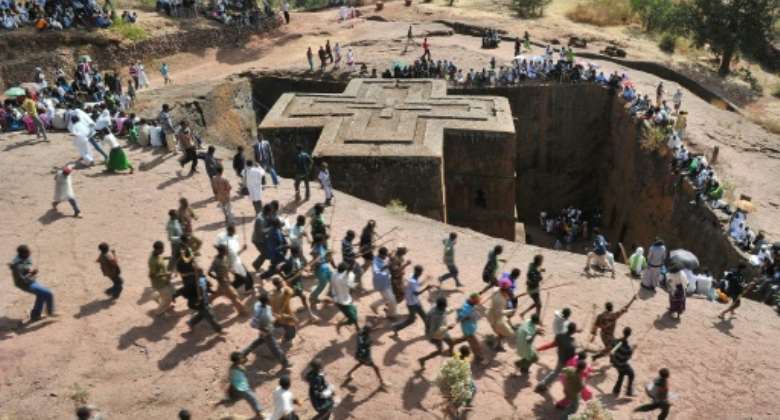 Lalibela is famous for its ancient rock-hewn churches. By CARL DE SOUZA (AFP/File)

Ethiopia said Wednesday that pro-government forces had recaptured the UNESCO World Heritage site Lalibela, which fell to Tigrayan fighters in August, as Prime Minister Abiy Ahmed's administration seeks to wrest back territory from the rebels.

After the rebels claimed major territorial gains as part of an advance on the capital Addis Ababa, Abiy announced last week that he would head to the battlefield as fighting reportedly rages on at least three fronts in the country.

Since then, the government has announced that it has taken back control of several small towns, including Shewa Robit, around 220 kilometres (135 miles) northeast of the capital by road and most recently, Lalibela which is famed for its 12th-century rock-hewn churches.

Pro-Abiy forces have "captured the historical town of Lalibela and Lalibela international airport," the government communications service said in a statement read out on government-affiliated Walta TV.

The statement added that pro-government forces were also "marching on Sekota city" in the Amhara region in northern Ethiopia, even as fighting reportedly spreads to Debre Sina, a town located less than 200 kilometres by road from Addis Ababa.

The Tigray People's Liberation Front has been locked in a war with Abiy's government since November 2020.

The conflict took a sharp turn around a month ago, when the TPLF claimed to have captured the strategic towns of Dessie and Kombolcha, located on a key highway to the capital.

Fears of a rebel march on Addis Ababa have prompted the United States, France, Britain and other countries to urge their citizens to leave Ethiopia as soon as possible, though Abiy's government says TPLF gains are overstated and the city is secure.

The war erupted when Abiy sent troops into the northernmost Tigray region to topple the TPLF -- a move he said came in response to rebel attacks on army camps.