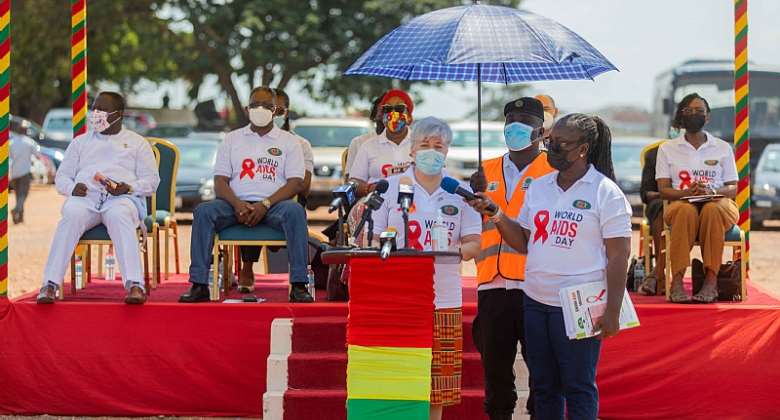 Good Morning! I’m pleased to be here with you today to share this commemoration of World AIDS Day in La Dade-Kotopon. I’m especially glad to share the spotlight with all of you, including to have virtual appearance from his Excellency, President Nana Addo Dankwa Akufo-Addo, as a demonstration of our commitment to a world without AIDS.

World AIDS Day is not only a time to remember the millions of lives lost to this terrible disease since the first cases of AIDS were identified in 1981, but also to inform, educate, and empower people living with HIV, and families, friends, and communities, as we move toward eradicating AIDS once and for all. We can do this!

In the last two years, the world’s public health organizations have been serely strained. COVID-19 poses unprecedented challenges to our families, our health, and our economies. Throughout the COVID-19 pandemic, the United States has been a strong and engaged partner for Ghana’s response: providing more than $30 million dollars in support across multiple sectors, including for testing, training, and support for public health institutions. In addition, the United States has provided medical equipment and critical care assistance such as ventilators and oxygen plants to help save Ghanaian lives. We’ve already donated more than 4.2 million COVID-19 vaccine doses specifically to Ghana via COVAX – part of the more than 250 million doses donated by the United States worldwide. And there are many more vaccines on the way.

So I urge Ghanaians to get your jab – ah beg!

Our support to the Government of Ghana’s response to COVID-19 has been extremely effective. The existing relationships, mutual trust and respect, and capacity established in Ghana through our PEPFAR partnership enabled our COVID-19 assistance to be delivered quickly. That support and cooperation has its roots in long-term engagement – 14 years – via the U.S. President’s Emergency Plan for AIDS Relief (PEPFAR).

Which U.S. President, you may wonder? Let me highlight for a moment the extraordinary bipartisan support for the PEPFAR program. Launched by our 43rd president, George W Bush, in 2003, PEPFAR has grown from strength to strength under successive U.S. Presidents: Barack Obama, Donald Trump, and Joseph Biden. PEPFAR has been funded by nine enthusiastic U.S. Congresses in a nonpartisan manner. This program is a great example of how building on a good idea by standing on the shoulders of those who have come before us benefits the greater good.

PEPFAR shows the power of what is possible through compassionate, cost-effective, accountable, and transparent American foreign assistance. PEPFAR has harnessed the coordinated U.S. government interagency efforts of the Department of State, the U.S. Agency for International Development, the Centers for Disease Control and Prevention (CDC), the Department of Defense, and even Peace Corps, to save thousands of lives and prevent the spread of HIV to many vulnerable communities and people in Ghana.

In the past 14 years, we’ve invested over $140 million dollars to help Ghanaians slow the spread of HIV, while supporting people and families living with HIV with lifesaving medications. In the past year alone, PEPFAR provided support to 4,200 newly diagnosed HIV-positive people in the Western Region and the Sefwi Wiawso municipality in the Western North Region, ensuring they had access to life-saving therapies. Tackling these areas with a laser focus has resulted in a phenomenal increase in people who are on life-saving and transmission-breaking treatment. The data speaks to these impressive efforts: Ninety-one percent of clients in those geographical areas are now on antiretroviral medications, compared to just 51% at the beginning of 2021 and all of this during a pandemic. PEPFAR also supported HIV self-testing and pre-exposure prophylaxis (PrEP) among at-risk persons in Ghana, reducing the risk of additional infections. PEPFAR continued to support Ghana’s front-line health workers and also invested in improving the laboratory and data systems that are essential to the success of the national HIV response.

Next year, PEPFAR will expand our work to the rest of the Western North Region and Ahafo Region, applying the lessons learned from the Western Region. We will provide HIV testing for nearly 10,000 Ghanaians deemed at risk of having HIV, while helping to reduce the viral load of more than 3,700 people living with HIV.

In a true medical breakthrough in recent years, reducing the viral load of people living with HIV both lowers risks to their health,

and also reduces the possibility of transmission to others: U=U: undetectable equals untransmittable. We’ve truly come a long way since a diagnosis of HIV was a death sentence.

We wholeheartedly support the UNAIDS 95-95-95 targets, meaning that by 2030, 95% of people living with HIV will know their status, 95% of people diagnosed as positive will receive sustained antiretroviral therapy, and 95% of all people receiving this therapy will have viral suppression to the point where they cannot transmit to other people.

By meeting these goals, we can break the cycle of transmission! It’s crucial to understand that preventing new HIV infection and supporting those with HIV/AIDS is not just about medication, antiretroviral therapies, and developing state-of-the art laboratory and information systems; it’s also about communication, education, and reducing the stigma and discrimination around HIV infection. PEPFAR in Ghana supports community service organizations to address stigma to encourage the most vulnerable to get HIV testing and, for those who test positive, start treatment as quickly as possible.

The United States has invested more than $85 billion dollars in the global AIDS response through PEPFAR and as the leading donor to the Global Fund to Fight AIDS, Tuberculosis, and Malaria. PEPFAR has saved more than 20 million lives.

However, PEPFAR doesn’t work alone. We work closely with stakeholders and partners in everything we do, including with the National AIDS Control Programme under the Ghana Health Service; the Ghana AIDS Commission; UNAIDS; the Global Fund; the World Health Organization; and other organizations supporting those living with HIV and AIDS.

We’ve come a long way – but remember that this progress can be undone. It can be undone by complacency. It can be undone if people living with HIV or those at risk of getting HIV are ostracized, marginalized, or stigmatized. It can be undone if policies drive them to conceal their status, hide their sexual orientation, and avoid testing and treatment. Such policies can have deadly consequences for the broader population as well. We saw that at the beginning of the AIDS epidemic 40 years ago in the United States.

Solutions for ending AIDS come not only from groundbreaking medication and treatments, but also from working together, communicating, and educating people to minimize new infections and support those living with HIV in a compassionate manner that breaks the chain of disease transmission, leaving no one behind.

I hope that someday we will commemorate World AIDS Day in a different way – looking through the rearview mirror to honor those who died and celebrate our victory in eradicating this disease. We’re not there yet, but together, we’re getting closer every day. We can do this!

And you may have noticed by orange ribbon along with my red ribbon for World AIDS Day, calling attention to the problem of Gender-Based Violence and the campaign to end it.

Thank you for your kind attention!

COVID-19: Our responsibility to one another is to get vaccin...
17 minutes ago

Bawku disturbance: Cooperate with government to ensure peace...
25 minutes ago