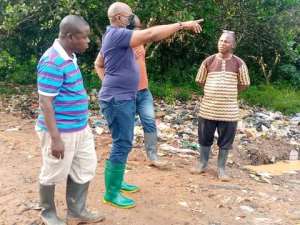 The Municipal Health Officer of the Environmental Health Department of the Agona West Municipal Assembly, Mr. George Freeman has commended MCE for Agona West, Hon. Evans Addison Coleman for his foresight to eradicate environmental related diseases in the Municipality.

He on behalf of the staff of the Department pledged their unflinching support towards the implementation of his dreams for the Municipality.

In an interview with newsmen in Agona Swedru recently, Mr. George Freeman observed the passionate nature the MCE was seriously tackling sanitation saying he deserves to be commended.

The Environmental Health Officer noted that within the short space in office, Hon. Evans Addison Coleman has proven that he would fully implement government's programmes and policies aimed at improving the quality of lives of the people, especially in the area of sanitation.

He recounted how Mahodwe, Yaabem North and South, Owane-Desueyim-Mangoase, Dwenho and Old Zongo Electoral Areas were engulfed with filth due to the issue of the dumping site leaving rubbish scattered all over the places.

"Hon. Evans Addison Coleman popularly known as Mr. Onomah becoming MCE for Agona West is divine intervention, a God-sent to those of us in the Environmental Health sector.

"Sanitation in Agona Swedru township was an eyesore to the people in the aforementioned Electoral Areas.

"Soon after assuming office, Hon. Evans Addison Coleman met stakeholders to deliberate on how best it could be done to solve the sanitation situation.

"It is not surprising that he took off days after the said meetings and visited the dumping site to assess the situation.

"As I speak, heaps of rubbishes which were dotted around the Electoral Areas have been cleared up to boost environmental hygiene to the people especially where public toilets are located," he stated.

Mr. George Freeman hinted that the Agona West Municipal Assembly was in the process of purchasing few more containers to facilitate the works of Zoomlion Company Limited which has been mandated by the Assembly to cart rubbish to the dumping site.

The Agona West Municipal Chief Executive had earlier met media practitioners in and around Agona Swedru to share his vision and mission with them.

He mentioned sanitation, education, health, agriculture and traffic flow especially in Agona Swedru as some of his priority areas.

He called on the media to assist the Assembly implement its programmes and activities to meet the needs of the people.

Hon. Evans Addison Coleman lamented over heavy traffic situations that affect commuters in the Municipal capital during market days and assured that the task force was going to be revamped to work efficiently.

"Agona Swedru is a commercial town and people troop in on daily basis to engage in various business activities especially on Mondays and Thursdays which are market days. People should not wait for hours in traffic before getting to their destinations," he stressed.

He pledged to operate an open door administration and urged the media to be circumspect in their reportage.

"Don't hesitate to contact me on any issue that bothers you and the general public so that we can find appropriate solutions to the problems.

"We must work together to ensure full implementation of Government's programmes, policies and activities. We are partners in development," the Agona West MCE note.

You have collapse the economy, now you want us to pay E-Levy...
13 minutes ago