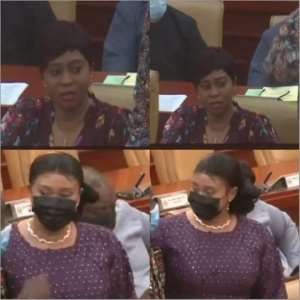 The Minority in Parliament has disclosed that findings from their preliminary investigations on the alleged impersonation of Sarah Adwoa Safo are quite disturbing.

North Tongu MP Samuel Okudzeto Ablakwa earlier today alleged that the Minority suspects someone was used by the majority in Parliament to impersonate the Dome-Kwabenya MP.

“Following pictures and videos we are reviewing this morning, it is becoming quite apparent to us that there may be a case of impersonation with regards to the lady who was presented as Adwoa Safo. It’s beginning to appear that she may not be Adwoa Safo,” the North Tongu MP told Joy FM on Wednesday morning.

“As a former deputy Majority Leader of this house, I want to put it on record that I was present in this House yesterday [Tuesday],” the Dome-Kwabenya MP said.

Still not convinced after listening to Sarah Adwoa Safo, Samuel Okudzeto Ablakwa says the Minority will continue with its investigations.

“We will continue with the investigations. We are still not convinced that the person who was in parliament yesterday purporting to be Adwoa Safo was indeed Adwoa Safo.

“We are convinced that the person who came to parliament yesterday was not Sarah Adwoa Safo,” Samuel Okudzeto Ablakwa said.

The North Tongu MP added, “We will soon release a statement of our preliminary findings of the investigations which are quite disturbing.

“This is very serious and we will demand that it comes with serious consequences if we are able to prove it.”

Mr. Ablakwa further disclosed that the Minority has obtained all the needed footage for investigations and will subject it to scrutiny by using modern technologies.

Hottest Photo Reports
Catch up with all the political quotes from our politicians.
Advertise here
More Headlines
ModernGhana Links
You have collapse the economy, now you want us to pay E-Levy; forget it – Mahama to Akufo-Addo
No discussions on E-Levy in Parliament this week
A/R: Police mount special ‘Bush Operation’ to arrest robbery gang that killed gold buyer
The world has changed; gov’t anticipate e-Levy will be permanent tax - John Kumah
Mahama Ayariga demands action against persons fueling Bawku tensions on social media
No way, the Minority I lead will never accept E-Levy in its current form and character – Haruna Iddrisu
Okada is killing too many people; let’s stop politicising its use and enforce the laws – Prof. Dodoo
Special Prosecutor begins probe into financial sector clean-up
Parliament to resume sitting today
TOP STORIES