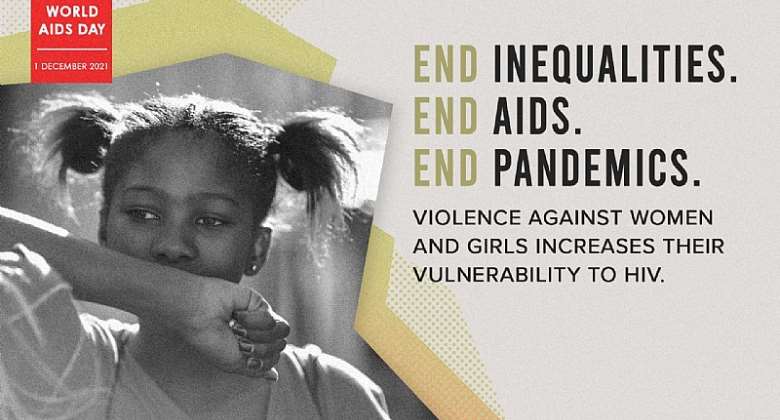 The theme, as set by the Joint United Nations Programme on HIV/AIDS (UNAIDS) and its allied agencies seeks to highlight the urgent need to end the inequalities that drive HIV infections, treatment and care.

According to UNAIDS, there were 1.5 million people newly infected with HIV in 2020 globally and 680 thousand people died of AIDS-related illnesses the same year. In Ghana, the 2020 HIV National Sentinel Survey Report estimated that 346,120 were living HIV, with 66 per cent being females. The national prevalence rate stood at 1.68 per cent.

In line with the focus for this year’s WAD commemoration, two organizations: Hope For Future Generations (HFFG) and Young Health Advocates Ghana (YHAG), have jointly issued a press statement calling for stakeholders working in the HIV space to take concrete steps to address factors that prevent the HIV community, especially young people, from accessing essential quality HIV services in Ghana.

The two organizations, in acknowledging the significant contribution of the Global Fund, UNAIDS Ghana, UNFPA Ghana, the Ghana AIDS Commission, National AIDS Control Programme and other partners in reducing the HIV prevalence, pointed out the urgent need for more to be done to end gender-based violence which has a strong correlation with increment in risk of acquiring HIV among many, especially women and girls.

“When we talk of addressing inequalities and ending AIDS, we are also talking of paying attention to gender-based violence which causes immediate devastating consequences to many women and girls. Harmful practices such as female genital mutilation, child and forced marriage, rape and other sexual violence still exist in Ghana. So in addressing HIV and AIDS, we must put in more efforts to tackle gender-based violence which is a serious health and protection issue,’’ said Mrs. Cecilia Senoo, Executive Director of HFFG.

According to Section 6 of the Ghana 2020 Human Rights Report by the United States Department of State [T11], rape and domestic violence remain a serious issue in Ghana.

The report notes that the fear of stigma surrounding HIV continues to discourage persons from getting tested for HIV infection, and many of those who tested positive do not want to seek timely care, adding that “the physical layout of many clinics often made it difficult for the centres to respect confidentiality." It said HIV-positive persons face discrimination in employment and often are forced to leave their jobs or houses.

The President of YHAG, Priscilla Ama Addo, also commented that: “The current COVID-19 pandemic has revealed the inequalities and violence faced by victims at the hands of their abusers. As an advocacy and support group that fights for the well-being of young people, we are aware that many young people are unable to access youth-friendly HIV services in Ghana due to fear of stigma and discrimination and we want to appeal to all key stakeholders to take cognisance of this issue or challenge and correct the situation.”

She said, according to the 2020 HIV National Sentinel Survey Report, nearly 19,000 new infections were recorded in persons aged 15 to 49 with majority of them being females hence the need to eradicate stigma, inequalities and include young people in the creation and implementation of HIV policies and service delivery.

“We humbly recommend that civil society organisations representing children and young people living with HIV are included in the creation of HIV policies and are assigned as watchdogs to ensure policy makers/duty bearers are delivering according to policies and implementation plans. We implore all stakeholders involved in the protection of vulnerable people to continue their support towards the vulnerable and remember them in policy formulation,” she stated.

Hope for Future Generations is a national community-based non-governmental organisation, involved in issues affecting women, children and girls in the country. The NGO was formed in 2001 and operates in all 16 regions of Ghana.

Young Health Advocates Ghana is a national network of young people working to prevent HIV among young Ghanaians under the auspices of Hope for Future Generations.

World AIDS Day is marked on 1 December each year to show support for people living with HIV and encourage progress in HIV/AIDS prevention, treatment and care around the world.