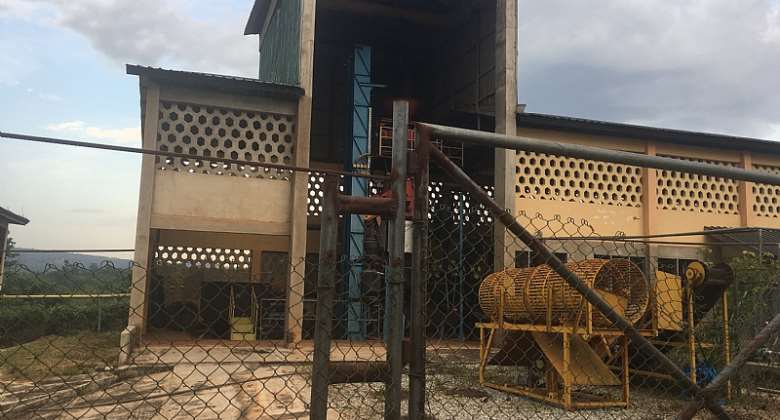 The Asueyi Gasification plant was installed as part of the project package for increasing the performance of the Cassava Industry in West and Central Africa being funded by the International Fund for Agricultural Development (IFAD) in collaboration with the Natural Resources Institute of Greenwich University – UK, SNV Netherlands Development Organization, the Government of Ghana through MOFA and the Federal University of Agriculture in Abeokuta (FUNAAB), Nigeria.

The project aimed at enabling poor people such as women and the youth living in rural areas in the West and Central African regions to develop sustainable cassava-based farm and non-farm business opportunities.

In a process planning report signed by Mr Everson Addo-Donkor District Chief Executive (DCE) for the Techiman North District on Monday disclosed that plans’ including advisory board have been constituted to provide expert advisory and support services for the effective and efficient management and sustainability of the facility.

The progress report noted that the implementation was moving steadily although, installation of the gasification plant is almost complete, stating that plans were far advanced to close the mechanization lapses for the facility to be operationalized soon.

The report stated that the facility would have been running by now but for some reason from the donor partners, the facility is still facing issues of electrical fittings, fixing of burners to process the cassava into gari among other things.

On capacity building, efforts were been made to recruit trained mechanical, technical, engineering and administrative staff who would operate and manage the facility to be achieved through a Private-Public Partnership initiative

Since sanitation was a priority, measures have put in place to improve sanitation through paving certain portions of the site as well as the construction of gutters. Again, specialized soakaways have been constructed to collect the liquid waste.

In addition, stakeholders including the AITI-KACE responsible for providing directions, guidance and automation, while the Ghana Investment Infrastructural Fund is to provide financial support to the project is committed to ensuring the project was completed and become operational.

Mrs Faustina Sakyi, President for the Project for the Asueyi community in an interview with this reporter noted that even though the project may lack raw materials for the start, efforts were been made by small scale farmers to provide the needed material for the facility to survive.

Mrs Sakyi said women farmers in the area were committed to ensuring they make a living out of the factory, however they would endeavour to cultivate large farms that would produce the needed martial to feed the facility.

She expressed satisfaction with the efforts government was putting in place to make the facility run and urged government and its partners to speed up its implementation efforts to make the project operational since it was worth enough to provide adequate employment for both women and the teeming youth in the area.

Mr Kwesi Adu Gyan, Bono East Regional Minister on his part lauded the commencement of the project. He said the Techiman North District Assembly and BEDEC were forming collaborations to seek effective management of the facility. He stated that the company was leaving no stone unturned to ensure the facility becomes operational to serve the people in the region.

Mr Gyan mentioned that project of this nature need to be operational and fully functional at all times, indeed strategies were been laid down by stakeholders such as the Ministry of Agriculture through the department of agriculture in the region to cultivate large farms that would provide the factory with unlimited access to raw material.

Again the GASIP, through the Ministry of Food and Agriculture, were introducing improved fast yielding, pest and drought resistant cassava varieties to farmers and also introduce the block farming system to improve the raw material base.

He urged developmental partners of the region to come back and complete their obligations focused on empowering the people in the region through the gasification plant, saying their efforts were paramount in contributing to support the overall agricultural development prospects of the area.