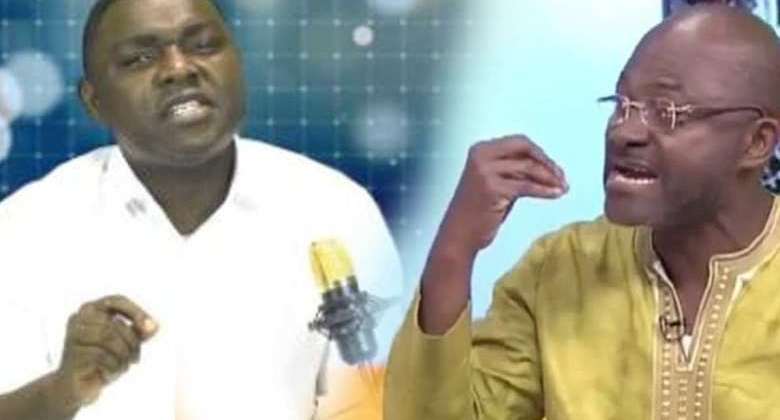 My attention has been drawn to the Ghanaian alleged defamer, Kevin Ekow Taylor, resorting to GoFundMe, thus, the online fundraising platform, to foot his likely legal bills to accrue defending himself against the libel suit filed against him by Kennedy Agyapong (Honourable), in a United States of America. It has become a public knowledge that he has been sued by Kennedy Agyapong (Hon), the Member of Parliament for Assin Central in the Central region, in a court in Virginia, USA.

Kevin Taylor is a native of Ghana. However, he is currently residing in the United States of America, either as a legal immigrant or a naturalised American citizen. He is internationally noted for slandering Ghanaians across-the-board, especially, the leadership of Ghana and more particularly, Kennedy Agyapong (Hon) and His Excellency the President, Nana Addo Dankwa Akufo-Addo.

He accuses them of all sorts of committed crimes as come into his mind, when he wants and feels like doing so. He either perceives them to have indulged themselves in the crimes he accuses them of, or he is certain that they have committed those crimes. Whatever the case is, however he levels the accusations against them, wherever and whenever he does it, Kennedy Agyapong has felt so offended that he has taken legal action against Kevin Taylor to prove his allegations of crimes against his person.

Kennedy Agyapong’s integrity stands tainted as I speak, and he may suffer physical, psychological and moral trauma as a result of the persistent social media attacks on him by Kevin Taylor for reasons only best known to him.

In criminal law, it is said, “he who alleges must prove”. It is Kevin Taylor, but not Kennedy Agyapong, who has to prove the criminal allegations levelled against him. The burden of proof is upon Kevin Taylor, because he is alleging that Kennedy has killed this or that person and has done this or that crime.

All that Kennedy needs to prove or provide to the court is material evidence to Kevin accusing him of those crimes and for these proofs, they abound on the social media, especially, on Kevin Taylor’s own media platform called “With all due respect” or whatever he calls it.

This civil suit will either strengthen or weaken Kevin Taylor on one hand, or Kennedy Agyapong on the other, depending on the final outcome of the case, thus, the verdict to be pronounced by the judge after hearing the case.

Nevertheless, I wonder why GoFundMe, the online fundraising platform created to help good causes like assisting needy persons and to provide basic needs of communities through non-governmental organizations (NGOs), is now being used to fund and enrich until now an alleged libeler, thus, a defamer, Kevin Taylor.

Will GoFundMe not embolden Kevin Taylor to continue with his insults on, and defamation of the characters of, some personalities in Ghana once he is guaranteed a source of financial assistance to extricate himself from court bills should he ever be sued by anyone for whatever reason?

Should he be found guilty in the civil suit brought against him by Kennedy, will those contributing through GoFundMe not themselves feel guilty of remotely aiding and abetting Kevin Taylor to soil the reputation of otherwise genuine persons? The opposite will be true should Kevin Taylor be able to prove his case and win it.

Except those who were allegedly sponsoring Kevin Taylor to go on that defamatory tangent for their selfish and parochial political interests, I will personally not advise any discerning Ghanaian or person worldwide to contribute a dime towards enriching and strengthening the hands of Kevin Taylor to continually tarnish the reputation of others on the social media.

The outcome of the civil suit, should it succeed, will serve as a lesson and deterrence to all those who sit behind their cameras on the social media to level wild criminal allegations against others without having any shred of credible, acceptable and permissible documentary, audio or video evidence.

Additionally, it will serve as a catalyst to help solve the outstanding murders in Ghana for which Kevin Taylor has persistently accused Kennedy Agyapong of committing.

Did Kennedy Agyapong kill Joseph Boakye Danquah and Ahmed Suale as confidently alleged by Kevin Taylor on his social media platform amid raining insults that cut across the bones on Kennedy Agyapong? We live to witness!

“GoFundMe, similarly as Crowdfunding, is the practice of funding a project or venture by raising small amounts of money from a large number of people, in modern times typically via the Internet”

May I once again request Ghanaian or worldwide philanthropists not to fund Kevin Taylor to defend himself against the libel suit brought against him as a result of his stupidity, intransigence, greed and amenability. I am saying this in the Akan proverbial belief that “Aponkye fa eka a ode ne wedie na etua”, to wit, “he who causes trouble, must be prepared to bear the consequences all alone”.

Subsequently, loudmouth Kevin Taylor, as obstinate as he is, must be prepared to bear the full consequences of his actions without any intelligent person rallying behind him financially.

To conclude, let me inform the public as follows:

1. “In a civil trial, a judge or jury examines the evidence to decide whether, by a "preponderance of the evidence," the defendant should be held legally responsible for the damages alleged by the plaintiff”. The case against Kevin Taylor is a civil suit.

2. “Criminal cases involve enforcing public codes of behaviour as embodied in the laws, with the government prosecuting individuals or institutions. In a criminal case, the government brings charges against the person alleged to have committed the crime”