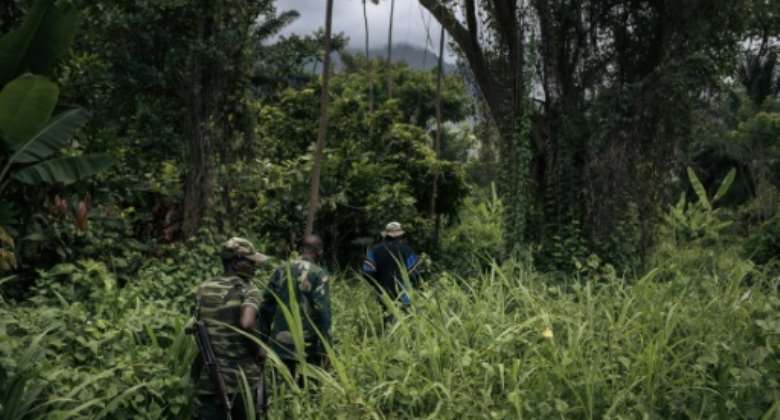 File picture from May 2021 of a Congolese army patrol in the forested mountains of Rwenzori, a border region that has suffered many ADF attacks. By ALEXIS HUGUET (AFP)

Ugandan troops stepped up their deployment in eastern DR Congo on Wednesday, witnesses said, on the second day of an operation against the notorious ADF rebel group launched in cooperation with Kinshasa.

"Right now, at noon, they are arriving aboard armour-plated cars, with escorts from members of the local security services," Tony Kitambala, a freelance journalist based in North Kivu province, said at Nobili on the border.

Ugandan soldiers were seen crossing there into the Democratic Republic of Congo (DRC) on Tuesday after their armed forces launched air and artillery strikes from within Ugandan territory.

The target is the Allied Democratic Forces (ADF) -- a group blamed for massacres in eastern DRC and attacks in the Ugandan capital, and which the so-called Islamic State describes as an affiliate.

The DRC last week gave its approval to a Ugandan offer to pursue the ADF on its soil, where it has holed up since the mid-1990s.

An aid worker in Nobili said "air strikes on ADF positions continued last evening" but the situation was calm on Wednesday.

"This morning, the UPDF (Ugandan armed forces) has been reinforcing its troops with men, ammunition and military trucks," he said.

There has been no official indication of the number of troops being deployed, or how long the operation will last.

On Tuesday, the Ugandan armed forces spokesman said the bombardments had successfully hit their targets, and that ground operations would hunt down "terrorists."

The DRC's military spokesman said late Tuesday that "search and control" operations were under way at the bombarded ADF locations, and that a situation report on the operation would soon be made public.

The DR Congo's Catholic Church says the ADF has killed around 6,000 civilians since 2013 while a respected monitor, the Kivu Security Tracker, blames it for more than 1,200 deaths in the area alone since 2017.

The Ugandan authorities have accused the ADF or a local group affiliated with it of carrying out or planning a string of attacks this year.

On November 16, four people were killed and 33 wounded in twin suicide bombings in Kampala. Police blamed the blast on a "domestic terror group" that it said was linked to the ADF.

Since April 2019, some ADF attacks in eastern DR Congo have been claimed by IS, which describes the group as its Islamic State Central Africa Province offshoot.

In March, the United States placed the ADF on its list of "terrorist" organisations linked to IS.