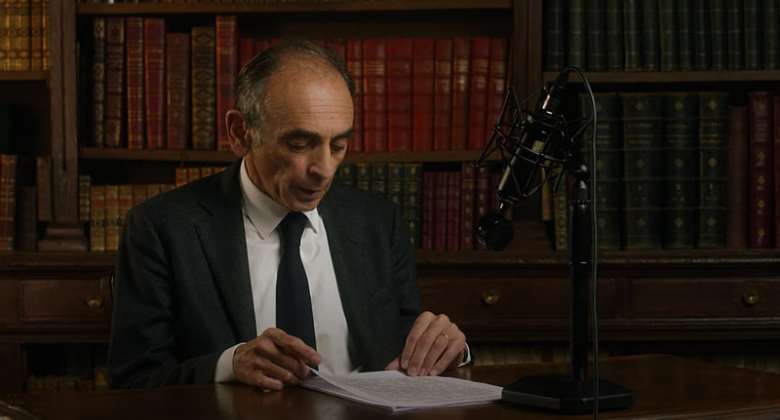 Far-right presidential hopeful Eric Zemmour has been castigated by France's broadcast media – and threatened with legal action – after using their images and logos without permission in a campaign video announcing his candidacy for next April's elections.

RFI sister station France 24, an international news channel, said it was “astonished” to discover its pictures and logo were used  in the video, which was broadcast on YouTube on Tuesday.

“France 24 demands the immediate withdrawal of these images … and if our demand is not met, we will examine our legal options,” said the station, which broadcasts in French, English, Arabic and Spanish.

By Wednesday morning, the 10-minute video, during which Zemmour reads from a script, had amassed more than 2 million views.

The film distributor Gaumont also took a firm position, saying that it had not received "any request" from Zemmour's team for the use of images from the films A Monkey in Winter and Joan of Arc, for which the company owns the copyright.

"We will study all the options open to us," a spokesperson said.

Joan of Arc director Luc Besson said his lawyer was initiating legal proceeding, arguing the images were used in a "fraudulent" way. Besson said he wanted to make it publicly known that he did not share Zemmour's political views.

The film's screenwriter, Jacques Attali, said he had sent a formal notice to Zemmour have the images removed from the video within 24 hours.

Meanwhile journalist and author Valerie Trierweiler – the ex partner of former Socialist president Francois Hollande – was incensed at the use of her image in the clip.

In a post on Twitter, she said Zemmour's video was the antithesis of her own political convictions, adding “I am resolutely for universalist values, which are far from this call to hatred”.

Elsewhere the media groups France Televisions, Radio France and INA – the institute that stores all French radio and television archives – said in a joint statement that Zemmour was obliged to pay for the image rights “just like everyone else".

The television station BFMTV, however, said it would not prosecute Zemmour despite the unauthorised use of its images.

A spokesperson for the political channel Public Sénat noted there were "five seconds of images with its logo, which was not its property because it belonged to President Emmanuel Macron's political party La République En Marche.

"We are going to order Zemmour's team to withdraw our logo," a spokesperson told AFP.

In an email to AFP, Zemmour's campaign team defended their use of the footage and logos – saying the candidate was not worried about the threats of legal action because he had used "very short extracts", which were allowed.

However a legal expert of the French Society of Management of Royalties told AFP the short extracts rule only applied to work that was "critical, controversial, scientific, educational or informative”.

A promotional clip for political purposes did not fit the criteria, the expert said.