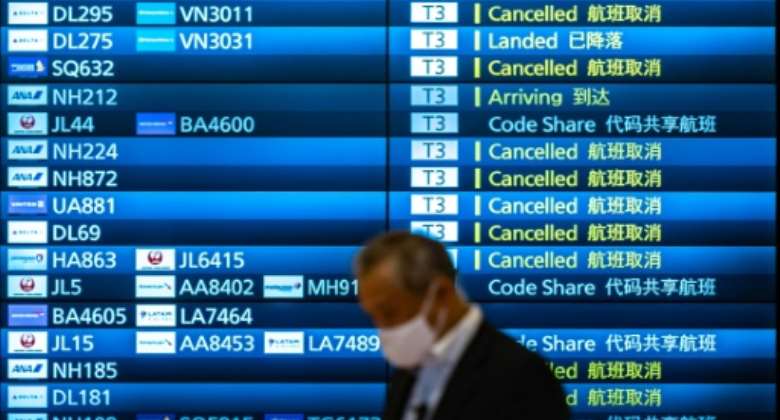 Japan has asked airlines to stop new incoming flight bookings for a month because of the Omicron coronavirus variant. By Philip FONG (AFP)

Japan suspended all new flight bookings into the country from Wednesday in response to Omicron, ignoring a World Health Organization warning against blanket travel bans as the new coronavirus strain spread further around the world.

And while the likely futility of such broad curbs was underscored by Dutch authorities reporting that Omicron was present in the country before South Africa reported its first cases on November 25, governments pressed ahead with emergency travel measures.

"We have asked airlines to halt accepting all new incoming flight reservations for one month starting December 1," a Japanese transport ministry official told AFP, adding that existing bookings would not be affected.

Japan confirmed its first Omicron case on Tuesday, and it had already tightened its tough Covid border measures.

Japanese authorities on Wednesday announced they had detected a second infection of the new strain in an arriving traveller -- this time in a person arriving from Peru.

Hong Kong placed Japan, Portugal and Sweden on its highest travel restriction category after the discovery of Omicron there.

These came despite the WHO saying Tuesday that such "blanket" moves risked doing more harm than good.

In a travel advisory, it warned the bans could ultimately dissuade countries from sharing data about the evolving virus.

But it did advise unvaccinated people vulnerable to Covid-19, including over-60s, to avoid travel to areas with community transmission of the virus.

WHO chief Tedros Adhanom Ghebreyesus said it was understandable for countries to seek to protect their citizens "against a variant we don't yet fully understand".

But he called for "rational, proportional risk-reduction measures".

So far, well over a dozen countries and territories have detected Omicron cases, including Australia, Britain, Canada, Israel, Italy and Portugal.

Omicron has emerged as much of the northern hemisphere was already bracing for a new winter wave of the pandemic -- leaving even nations with high vaccination rates struggling to contain rising infection numbers. By Thomas SAMSON (AFP)

Latin America reported its first two cases of the variant Tuesday -- in people who travelled from South Africa to Brazil.

President Joe Biden said the US travel bans on just the southern African nations would stay in place, without referencing the other places where Omicron has been detected.

Asked how long travel restrictions that took effect Monday on South Africa and seven other southern African countries would remain, Biden said it "kind of depends".

Holidaymakers are greeted by traditional cultural groups as Fiji opens its borders to international travellers for the first time since the Covid-19 pandemic swept the globe. By Handout (TOURISM FIJI/AFP)

"We're going to learn a lot more in the next couple weeks about the lethality of this virus, about how much it spreads, what we have to control it, etcetera," he told reporters.

Asked if any expansion of the travel restrictions to other countries could be made suddenly, as happened under former president Donald Trump, Biden said: "Unlike Trump I don't shock our allies."

The WHO believes the high number of mutations on this variant may make it more transmissible or resistant to vaccines, but it could take weeks to determine whether and to what extent Omicron is vaccine-resistant.

Its detection and spread, however, have highlighted that the global fight against Covid-19 is far from over.

Covid fight far from over

The variant emerged as much of the northern hemisphere was already bracing for a new winter wave of the pandemic -- leaving even nations with high vaccination rates struggling to contain rising infection numbers and prevent health services from being overwhelmed.

Greece went ahead Tuesday in making vaccines compulsory for over-60s, while Norway will offer booster shots to all adults before Easter, as preferable to a lockdown.

Britain has set a target of delivering third jabs to all adults within two months.

While the European summer of fleeting Covid freedoms may be over, in the southern hemisphere, the Pacific island of Fiji ended 615 days of international isolation on Wednesday and reopened to tourists.

Traditional dancers in grass skirts welcomed waving holidaymakers from Sydney, the first of an expected flood of desperately needed tourists in the coming weeks.

Fiji Airways chief executive Andre Viljoen said it was a "momentous" occasion for the country, where tourism accounts for about 40 percent of the economy.