Zambia's Hichilema urged to walk the talk after 'slow' start

By Obert SIMWANZA with Sofia CHRISTENSEN in Johannesburg
Zambia 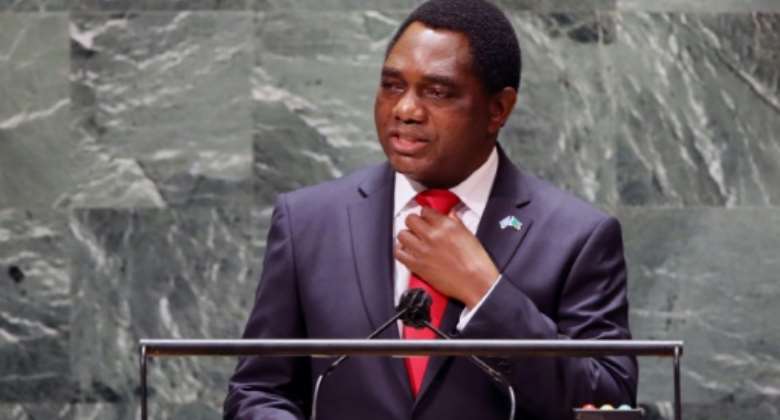 Hichilema has vowed to revive the economy, root out graft and woo back investors to Africa's second copper producer. By Spencer Platt (POOL/AFP/File)

The August election of Zambia's President Hakainde Hichilema, which he won by a landslide, was widely hailed as a milestone for African opposition movements.

But while in his first 100 days in office Hichilema had reassured investors, he has been seen to drag his feet on promises to fight corruption and reduce poverty, fuelling impatience among voters.

Zambians turned out en masse to vote for change on August 12, fed up with growing economic hardship and repression under their former leader Edgar Lungu.

Hichilema inherited a heavily indebted country -- the first in Africa to default during Covid -- and soured bailout negotiations with the International Monetary Fund (IMF).

Sworn in on August 24, he vowed to revive the economy, root out graft and woo back scarred investors to Africa's second copper producer.

Much of the international community remains starry-eyed, but some Zambians are beginning to feel disenchanted.

"The president is too slow," said Martin Nawa, a 30-year-old newspaper vendor in the capital Lusaka.

"These people are hiding whatever they have stolen," he told AFP, referring to alleged embezzlement by the previous regime.

Critics say Hichilema has been slow to take action against wrongdoers.

So far, only one former state journalist has been charged for acquiring property with public funds. She was freed after surrendering her assets.

"He has only shown the will to fight corruption, but he will not achieve anything with the same officials in the police" and anti-graft bodies, said Zambian rights activist Brebner Changala.

A self-made businessman, Hichilema centred his campaign on economic restructuring.

The 2022 budget he presented to parliament at the end of October was well-received among investors and creditors -- reassured by promised fiscal reforms, spending cuts and debt transparency.

These measures "will help the country make progress in debt restructuring" and facilitate negotiations with the IMF that resumed this month, said Aleix Montana of risk analysis firm Verisk Maplecroft.

Hichilema has been critical in international media of the billions of dollars of sovereign debt Lungu accumulated during his six-year rule.

He claims it was grossly underestimated, particularly regarding money owed to China.

The president "is quite popular among investors, especially in the mining sector," said Montana, pointing to a new policy that will allow companies to deduct mineral royalties from corporate tax.

Zambia's sovereign bond prices, which jumped after Hichilema's election, have continued to increase steadily, he added.

Hichilema has sought to shelter citizens from the impact of fiscal reforms, increasing constituency development funds and introducing free access to secondary school.

But a "proposed reduction of subsidies for fertiliser, electricity and fuel is likely to have a serious knock-on effect on people's budgets," noted South Africa-based political analyst Nicole Beardsworth.

Inflation has remained stuck at a high of over 20 percent, she added, stressing that it was still too early to draw a line.

For his part, the more optimistic Zambian economist Maambo Hamaundu said: "I can confidently say that as a country we are on the right trajectory/"

Politically, Hichilema set off on a positive note, freezing the bank accounts of Lungu's close aides and filling government positions with technocrats.

And even critics agree the new government is less repressive.

"What 100 days has done to us is give us back our freedom and liberty, and for that we must give him credit," Changala said.

Beardsworth, however, flagged a "mushrooming of appointments to State House" which he derided as "thank-you appointments".

Eyebrows have also been raised around a flurry of work trips Hichilema has already made.

Since a first trumpeted visit to the United States for the UN General Assembly, he has travelled to Glasgow for COP26 and attended events in Botswana, the Democratic Republic of Congo and South Africa.

"I travelled with a lean delegation" on a commercial flight, Hichilema has tweeted in his defence, distancing himself from Lungu's controversial presidential jet.

A government spokesman declined to comment on Hichilema's first 100 days in office, saying an official statement would be issued on the topic.

The high expectations spurred by Hichilema's victory could be a "double-edged sword", Montana said.

"Discontent will grow if he is unable to provide some tangible results," he warned. "The people who voted for him are expecting a real change soon."