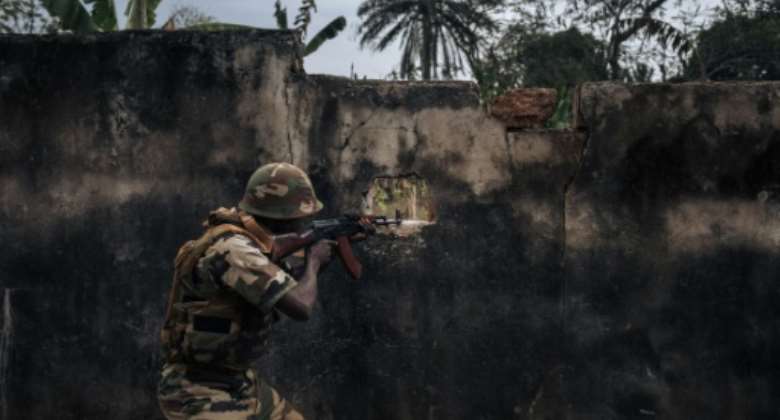 The Central African Republic was plunged into a bloody civil war after a coup in 2013. By (AFP/File)

Rebel attacks in the northwest of the Central African Republic at the weekend claimed at least 30 civilian lives and those of two soldiers, local officials said Tuesday.

Simultaneous attacks on Sunday hit the villages of Kaita and Bayengou, near the border with Cameroon some 500 kilometres (300 miles) north of the capital Bangui, said regional administrator Esaie Gbanin, whose death toll was confirmed by a humanitarian source.

Many residents have fled to Cameroon, Gbanin added.

The Central African Republic, the second least developed country in the world according to UN rankings, was plunged into a bloody civil war after a coup in 2013.

The conflict has calmed over the past three years, although large swathes of territory remain outside central government control.

Gbanin blamed Sunday's attacks on elements of the 3R (Return, Reclamation, Rehabilitation) rebels. The 3R, which is mainly composed of fighters from the Fulani ethnic group, is one of the most powerful armed groups in the country.

At the end of December 2020, they joined in the rebel coalition that sought to overthrow President Faustin Archange Touadera and prevent his re-election.

Touadera prevailed, and government forces have since retaken the towns and much of the two-thirds of the country that the rebels had controlled, mainly thanks to Rwandan soldiers and the presence of hundreds of Russian mercenaries fighting alongside them.

The European Commission on Tuesday said the presence of Russian mercenaries of the Wagner group could lead the EU to halt its military training mission in the Central African Republic.