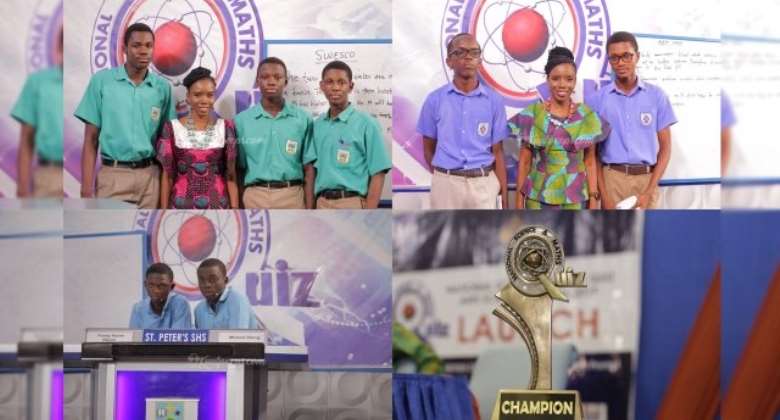 The National Science and Maths Quiz (NSMQ) which began in 1993 saw its 2021 edition come to an end on Friday, November 27, 2021, in which Prempeh College emerge winners for the fifth time. The 2021 edition became historic as a school from the Volta region, KETASCO to be precise, for the first time in the competition's history, made it to the finals. It became more refreshing to note that KETASCO had, for the first time in eight years of the competition's history, presented a female contestant in the finals. Even though they couldn't win the ultimate award, history was made and kudos to them.

This competition which began through the effort of Mr. Kweku Mensah-Bonsu in 1993 has become the longest-running educational programme on Ghanaian television and has seen many notable schools such as Prempeh college, Achimota, Adisadel, Mfatsipim, Presec—Legon, St. Peters, St. Augustine’s College, etc emerge as winners over the years.

The quiz is structured in five rounds as follows: Round 1 — fundamental questions, Round 2 — speed race, Round 3 — problem of the day, Round 4 — true or false, Round 5 — riddles.

The programme has since been successful in achieving its objectives, and has captured the attention and won the admiration of most Ghanaians domestically and abroad making everyone to support schools that come from their respective regions.

The NSMQ has chalked many achievements including winning the TV Program of the Year, 2017 (CIMG Awards), getting schools (winners of the competition) to represent the nation in international competitions, developing the interest in students to study Science and Maths, creating healthy educational competition among SHS, just to mention a few.

Participating schools and their contestants have also benefited immensely from the NSMQ through the awards of cash prizes, scholarship packages, individual recognition as well as holding the bragging right.

We have over the years applauded these contestants for their display of academic brilliance and mastery over the contents of what there is for them to learn. This is evident in their ability to answer questions that seem to most of us as 'out of the world questions', but have failed as a people to identify the direct benefits of this program to the socio-economic development of the nation.

Science and Technology have become the building block for economic growth in recent times, and the NSMQ seems to make us believe in our students to have known all fundamental scientific and mathematical principles there is to know to give rise to technology.

In the face of this, one could be right to ask why these winners and their runner-ups have not been able to convert this theoretical knowledge into practical terms to develop technological means to help solve the nation's socio-economic problems over the years. It is obvious our concentration is just on the acquisition of theoretical knowledge rather than practicalizing the acquired knowledge. In 2018, the winners of the NSMQ represented the nation in an international Science competition held in Portugal but came back disappointed as they couldn't successfully compete with their competitors from other countries because our students couldn't operate the equipment they were given to work with. This was made known when Dr. Kaufmann, the NSMQ host spoke on 'the KSM show' in 2018 and she said "the NSMQ winners failed because they didn't know the equipment".

This notwithstanding, all hope is not lost. We can, as a nation, still right the wrongs of the past and make modifications to the benefit of our mother Ghana. We may consider the following as we go forth to ensure development.

1. Instead of awarding huge sums of money to the winning schools and their runner-ups which may end up being misappropriated, the government, corporate bodies and other sponsors should channel these funds into building well-equipped ultra-modern science laboratories and computer laboratories for them. This will enable the students to have access to modern equipment and practice what they learn in theory.

2. Cash prizes awarded to contestants should be channelled into scholarship packages and trust funds in their names. This will bring to an end the truncation of the education of these brilliant students due to lack of funds.

3. The competition should also be restructured to include a 'practical round'. A round where contestants are given practical tasks to accomplish using the lab equipment. This, I think would make our students have an interest in learning the practical aspect.

Let us come together as a nation and transform this golden opportunity into reality and make it a productive means of solving our nation's socio-economic problems in the long run. National Science and Maths Quiz (NSMQ) has come to stay, a giant step is needed now to usher us into the golden era where practical & theoretical knowledge marry themselves for a socio-economic master class.

Latest Photo Reports
Catch up with all the political quotes from our politicians.
Advertise here
More Article
ModernGhana Links
The Determinants of Rural Poverty in Somalia
Informal waste collection shouldn't let plastic polluters off the hook: here's why
COVID lessons: scientists without quality data are like unarmed soldiers in a war zone
Eavesdropping on nature: why Africa needs more bioacoustics research
Human rights and COVID restrictions: what South Africans are willing to give up
In a fiscal ditch? African countries should try public participation in the budget process
Can you send an additional Ghc800 to me?
Kenya Airways is in financial trouble (again). Why national carriers have a hard time
A decade later, no end in sight for Libya’s political transition
TOP STORIES