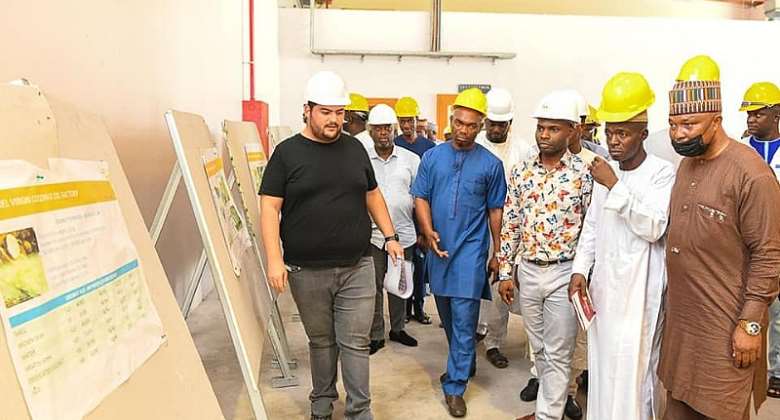 A coalition made up of groups in the nineteen states of Northern Nigeria is currently in Akwa Ibom on a fact-finding mission.

Led by the National Coordinator, Alhaji Balarabe Rufai, members of the delegation are being conducted round project sites by the Chief Press Secretary to the Governor, Ekerete Udoh, represented by the Special Assistant to the Governor on Research and Documentation, Mr. Essien Ndueso, his counterparts incharge of New Media, Aniekeme Finbar and that of ICT, Solomon Eyo.

At the coconut refinery, the delegation was also conducted round the factory by the Facility Manager, Mr. Ozan Aydingenc who took the team through the production line of the factory, briefing the visitors on the progress so far made at the facility which is nearly completed.

Among facilities visited include, the I kilometre Ikot Oku Ikono flyover, Ekom Iman-Etinan road, the cable bridge at Ekpene Ukpa before arriving at the Coconut Refinery.

Speaking to journalists at the Coconut oil factory, the leader of the Northern group, Alhaji Balarabe Rufai hailed Governor Udom Emmanuel for his foresight in facilitating the establishment of the factory.

He said job opportunities would be created for youths.

He charged other state governors in the country to emulate Governor Emmanuel.

"This is a wonderful thing the Governor is doing. I want to call on other governors to emulate it so that our youths would be gainfully engaged," he stated.

Finance Minister announce transactions to be excluded from E...
35 minutes ago