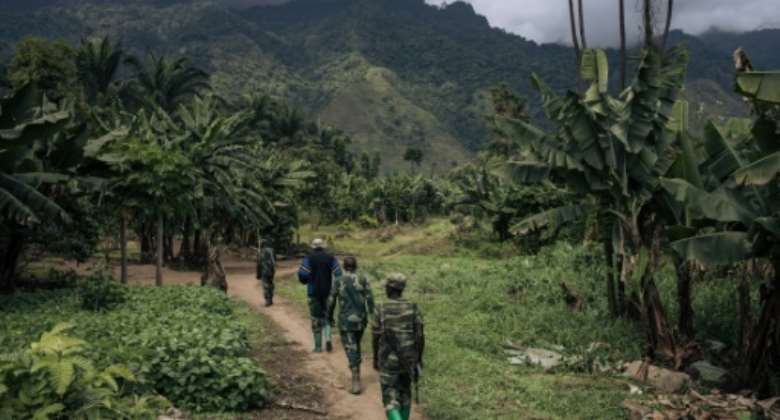 A Congolese patrol pictured in May in the Rwenzori sector near the Ugandan border. The area has suffered repeated ADF attacks. By ALEXIS HUGUET (AFP)

"As announced, targeted and concerted action with the Ugandan army started today with air strikes and artillery fire from Uganda against positions of the terrorist ADF in the DRC," Congolese government spokesman and Communications Minister Patrick Muyaya wrote on Twitter.

At almost the same time, a spokesman for the Ugandan armed forces tweeted: "This morning, we have launched joint air and artillery strikes against ADF camps with our Congolese allies."

Early Tuesday, witness accounts reaching Beni, the chief town in the border province of North Kivu, reported heavy artillery fire in the Watalinga sector, causing panic at the nearby frontier post of Kamango.

The strikes came two days after a senior Congolese source reported that President Felix Tshisekedi had given Uganda permission to pursue the ADF on DR Congo soil.

Linked by the United States to the Islamic State group, the ADF is deeply feared in eastern Democratic Republic of Congo.

The DRC's Catholic Church says the ADF has killed around 6,000 civilians since 2013 while a respected monitor, the Kivu Security Tracker (KST), blames it for more than 1,200 deaths in North Kivu's Beni area alone since 2017.

The Ugandan authorities have recently accused the ADF or a local group affiliated with it of carrying out or planning attacks.

The group established itself in eastern DRC in 1995, becoming the deadliest of scores of outlawed forces in the troubled region.

It has been blamed for thousands of killings in North Kivu province, especially in the Beni area.

Since April 2019, some ADF attacks have been claimed by IS, which describes the group as its Islamic State Central Africa Province offshoot.

In March, the United States placed the ADF on its list of "terrorist" organisations linked to the IS.

On November 16, four people were killed and 33 were injured in twin suicide bombings in Kampala, which police attributed to a "domestic terror group" linked to the ADF.

The blasts, claimed by IS, came on the heels of a bomb attack at a roadside eatery on October 23 that killed one woman, and a suicide blast on a bus near Kampala on October 25 that wounded several people.

In late October, the Ugandan police said they had arrested suspected ADF members, who they believed were plotting a new attack on "major installations".

Uganda has also blamed the ADF for a foiled bomb attack in August on the funeral of an army commander who led a major offensive against Al-Shabaab militants in Somalia.

Three men were charged with terrorism on November 5 in relation to that incident.

A presidential advisor in Kinshasa told AFP on Sunday that the DRC would allow armed forces from Uganda to "enter Congolese territory to chase ADF terrorists."

The move is not universally supported in the DRC, where many critics recall the role of Uganda and Rwanda in the decades-long instability in the east of the country.

On Monday, Muyaya told journalists that there were "no Ugandan troops" in the DRC, but "targeted and concerted actions... (were) envisaged with the Ugandan army to fight the ADF terrorists, our common enemy."

The eastern DRC provinces of North Kivu and Ituri have been under a "state of siege" since May in a bid to step up a military offensive against the rebels, with soldiers replacing civil servants in key positions.