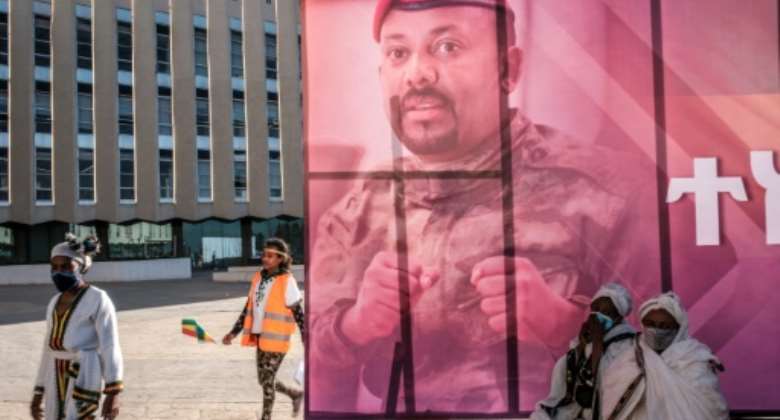 Abiy, a former lieutenant-colonel in the military, announced last week that he would head to the battlefield. By EDUARDO SOTERAS (AFP/File)

"The youth of Tigray is perishing like leaves. Knowing it is defeated, it is being led by one who does not have a clear vision or plan," Abiy, winner of the 2019 Nobel Peace Prize, said in comments aired on state media.

"It should surrender today to the Ethiopian National Defence Force, to the special forces, to the militias and to the people."

Tuesday's footage was the latest in a series of clips showing Abiy, in uniform with soldiers, in what appeared to be the northeastern region of Afar.

The area has been the site of fierce fighting in recent weeks as the Tigray People's Liberation Front (TPLF) rebel group tries to seize control of a critical highway that supplies the capital Addis Ababa.

On Sunday state media claimed the army controlled the lowland Afar town of Chifra, and Abiy said Tuesday such gains would be replicated to the west, in Amhara region.

"The enemy has been defeated. We scored an unthinkable victory with the eastern command in one day... Now in the west we will repeat this victory," he said.

The announcement last week that Abiy, a former lieutenant-colonel in the military, would head to the battlefield came after the TPLF claimed to control Shewa Robit, a town just 220 kilometres (135 miles) northeast of Addis Ababa by road.

Fears of a rebel march on the capital have prompted the United States, France, the United Kingdom and other countries to urge their citizens to leave Ethiopia as soon as possible, though Abiy's government says TPLF gains are overstated and the city is secure.

War broke out between the two sides in November 2020, with Abiy sending troops into the northernmost Tigray region to topple the TPLF -- a move he said came in response to TPLF attacks on army camps.

Diplomats led by Olusegun Obasanjo, the African Union's special envoy for the Horn of Africa, are trying to broker a ceasefire, though there has been little evident progress so far.