By David Coffey - RFI
US & Canada 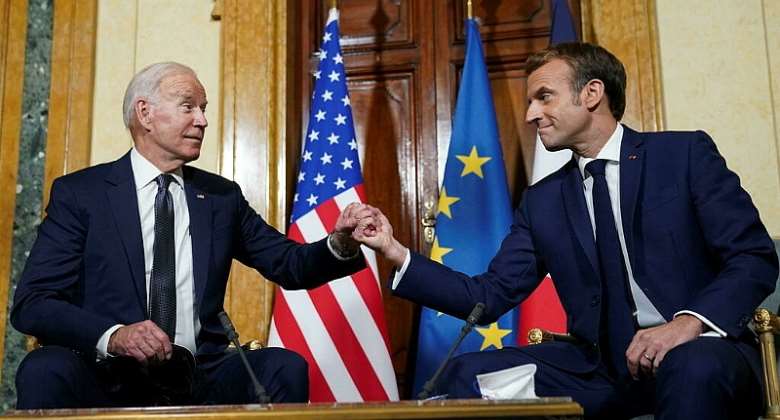 The transatlantic friendship is still on shaky ground almost a year after Joe Biden swept to power with the promise of stamping out four years of vitriol from the Trump presidency. Paris Perspective probes why the Franco-US honeymoon was so quickly extinguished, and what steps are being taken to repair the centuries-old alliance.

During a time when new alliances and friendships are being forged, France feels it's losing out, explains former US diplomat William Jordan, now based in Paris.

Complicated post-Brexit British ties with the EU, Australia's stunning about-face over a lucrative submarine deal and the US's desire to also build up strategic partnerships with other countries has created a geopolitical jigsaw that's making it hard for France and the US to find the pieces that will enable them fit comfortably in the bigger picture.

When France recalled its ambassador from Washington after Australia dumped Paris in favour of a three-way submarine defence deal with the US and Britain, Biden was quick to dispatch Vice President Kamala Harris to the French capital to hurriedly work things out.

Pulling out the ambassador was a dramatic move, and the first time France had done so in its 243-year frienship with the United States.

While the Harris visit was an important first step, the "subgate" betrayal – which France unequivocally descibed as a "stab in the back" – is still far from forgotten, Jordan told RFI.

"They [Harris and Macron] met in the met in Rome at the G20, and it was very clear that the French position was to make the Americans grovel a little bit more," he says.

"But what I've heard from the American embassy here, is that everybody believes the visit by Kamala Harris was positive.

"If an American official visits Paris, participates in all the meetings, sticks to predictable talking points, doesn't sulk and doesn't refuse to attend certain things because they're afraid they're going to be beaten up by all the other participants ... well, then it's a success."

Australia, the US and Britain this month formally embarked on their controversial deal, the AUKUS security alliance, to equip Australia's navy with nuclear-powered submarines.

France remains infuriated by the secretive way in which the three countries collaborated to ditch the French deal to supply Canberra with traditional diesel-powered submarines.

AUKUS allows for the exchange of sensitive "naval nuclear propulsion information" between Australia, the US and Britain in a bid to confront strategic tensions in the Indo-Pacific region.

Biden has admitted that AUKUS was handled clumsily and "was not done with a lot of grace".

For its part China, has called the agreement “extremely irresponsible”.

In response to the switch of allegiances in the Indo-Pacific, France has also shifted its focus. Foreign Minister Jean-Yves Le Drian paid a two-day visit to Indonesia to follow up on a defence deal and the sale of 36 Rafale jets.

Paris is seeking to strengthen its ties in the region via high-level meetings in countries ranging from Japan to India and Vietnam. When listing regional allies ahead of the Jakarta trip, Le Drian made sure not to count Australia among them.

Yet when it comes to facing down China, French policy in the Indo-Pacific is "ambiguous, to say the least", says Jordan.

"The French made a big deal [on the internet] about having sent a nuclear submarine on a worldwide patrol that included going through some of the disputed waters in the South China Sea."

However, every time the US has tried to get France and other European countries on board against China, the reaction has been uneasy.

The big question, says Jordan, is to what extent is France plans to go it alone.

"Is this going to be woven into some larger Western initiative?" he asks.

"And if that's the case, where exactly does Europe as a whole fit in? Because at the moment, the last thing one can say about Europe is that it has a cohesive, coherent or consolidated policy."

Indeed with German Chancellor Angela Merkel on the way out, Europe finds itself with no collective leadership.

For the Biden administration, Jordan says, the EU has to "get its act in order", adding there wasn't much enthusiasm for French President Emmanuel Macron to step into Merkel's role as de facto head of Europe.

"What we're seeing here is the defining of a post-Brexit Europe. Britain used to play an important role in the past, and is now no longer part of it," Jordan adds.

It's a pivotal time for Europe, and for the US as Biden makes decisions on how to deal with Nato – an alliance that faces challenges of its own – as well as China, Russia and Ukraine.

When Biden said America was "back", it was thought that he would take steps to restore ties with America's longtime partners.

"That hasn't happened," Jordan says. "Washington is looking for European leadership, and trying to find out who to engage with."

The Russian challenge, however, underscores that for the last 15 to 20 years, Nato is no longer the greatest alliance that ever existed.

With Russian troops reported to be amassing on the border with Ukraine, the role of Nato and how the alliance stands to shape transatlantic ties will be significant. This will be particularly important given the Soviets had long sought ways to sow division among Nato allies, Jordan adds.

"The short- and intermediate-range ballistic missiles were only for use against Europe," he says. And having risen through the ranks of the KGB during the Cold War, Vladimir Putin has a lot more levers at his diposal that the Europeans do to fight back.

"[Putin's] looking to see how far he can push things. And is the West prepared to go into a hot war on behalf of a country that isn't part of Nato?"

Unlikely.
Despite drawing a line in the sand regarding the integrity of Ukraine during a recent telephone conversation with Putin, Macron has more pressing issues on the home front as France gears up for presidential elections in April 2022.

To be continued.
Watch full video here
Written, produced and presented by David Coffey
Recorded and edited by Thibault Baudel
William Jordan is a former US diplomat based in Paris and president of the Association of Americans Resident Overseas.