Police justify the use of force to arrest suspect at Mamprobi 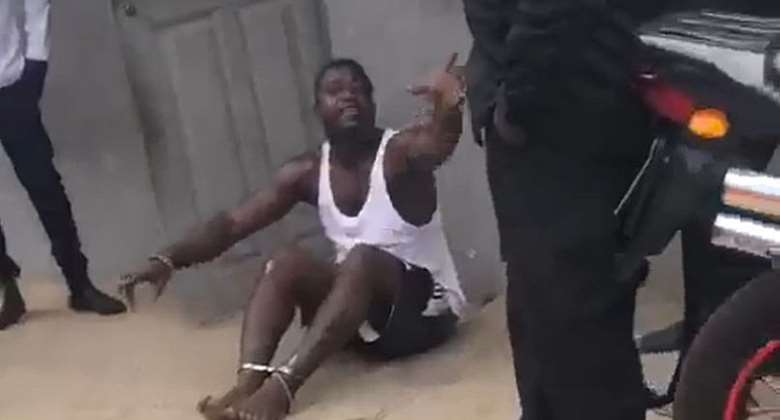 The Ghana Police Service has through a statement explained that its officers used minimum force to arrest suspects at Mamprobi after he resisted arrest.

Last week, a video of the police applying force to arrest a man went viral as many condemned the content of the video.

Today, the police in a statement issued and signed by DSP Juliana Obeng of the Public Affairs Unit to set the records straight have narrated what actually happened.

According to the police, the suspect, Asafoatse Aryee Obo, a businessman together with one other, Nii Armah Wulu I had committed various offenses and were invited to the police station.

The two failed to report to the station, leading to officers being sent to bring them in.

Although Nii Armah Wulu I complied with the police, Asafoatse Aryee Obo resisted and attacked some of the officers.

It was after this incidence that the officers applied reasonable physical, but minimum force to cause his arrest.

On charges of conspiracy to commit crime, assault, causing unlawful damage, resisting arrest and rescue, and assault on a public officer, the two suspects were subsequently arraigned before the court on November 24, where they were remanded.

Reappearing in court today, the two have been granted bail to the tune of Eighty Thousand Ghana Cedis with two (2) sureties each.

They are however expected to reappear before the court on December 16, 2021.

Read the full statement from the police below:

The Accra Regional Police Command, in response to public concern on a video making rounds on social media which shows the use of reasonable physical, but minimum force applied by the Police whilst arresting a suspect on 22nd November, 2021 states as follows:

(1) ASAFOATSE ARYEE OBO, aged: 32, a Businessman together with

(2) NII ARMAH WULU I, aged: 48, also a Businessman and Dzaasetse of Mamprobi, were arrested at Mamprobi a suburb of Accra on 22nd November, 2021 after several failed invitations by the Police.

The suspects were arrested for the following offences.

1. Conspiracy To Commit Crime: To Wit, Unlawfully Exercising Supervision or Control of Land Development and Preventing a Developer from Developing the Land

2. Unlawfully Exercising Supervision or Control of Land Development and Preventing a Developer from Developing the Land

6. Assault on a Public Officer

The offences charged on the suspects concerns several criminal engagements including an attack launched on a victim on 5th November 2021 at about 10:30 am at Mamprobi.

The suspects Nii Armah Wulu together with Asafoatse Aryee Obo went to the victim, a 60 year old woman who was constructing a building at her late father’s residence and instructed her to stop work immediately.

The suspects demanded an amount of Ten Thousand Ghana Cedis (GH₵10,000.00) as a digging fee from her although the victim had obtained the appropriate permit for the construction. The suspects also ordered workers and suppliers of building material at the construction site to run for their lives.

During the confrontations, the victim decided to film the incident, this infuriated the suspects. Suspect Asafoatse Aryee Obo pounced on the victim, pushed her to the ground, forcibly seized her Samsung mobile phone valued at One Thousand Two Hundred and Fifty Ghana Cedis (GH₵1,250.00), and smashed the phone on the floor without any provocation, thereby causing damage to the phone.

The suspects also demolished sections of the building under construction. This led to the arrest of the suspects.

Given the circumstance, the Police had to resort to the application of the force needed at the time, because all other means to get the suspect to remain calm and comply with the arrest procedure had failed.

The action of the Police was necessitated to prevent the suspect from causing further harm to other officers and persons who had gathered at the scene of the arrest.

However, suspect Nii Armah Wulu I, who did not resist arrest, was treated courteously and escorted to the Police station for interrogation.

The suspects were arraigned before Circuit 8 on 24th November, 2021. They were both remanded into Police custody and on 29th November 2021, they reappeared at the court and were granted bail to the tune of Eighty Thousand Ghana Cedis with two (2) sureties each. They are however expected to reappear before the court on 16th December, 2021.

The Police reiterate that the Criminal Offences Act 1960 (Act 29) provides for the reasonable use of force by the Police.

Also, in line with the demands of the Profession, the Police will continue to act impartially and enforce all existing laws, without fear, discrimination and continue to protect human dignity, maintaining and upholding the rights of all persons.

In light of this, the Police call on the support of members of the general public to volunteer, timely and accurate information on security as they remain vigilant, especially before, during and after the yuletide.