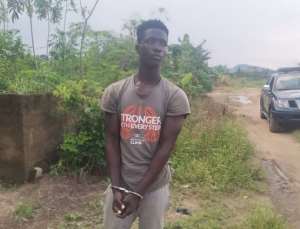 A top land guard, identified as Ibrahim Mushahudu Aka “One Million” who has been attacking and terrorizing residents and land owners at Teacher Mante, Adesso, and its surroundings by taking over their lands is currently in the grips of the Police.

The suspect, who is expected to be put before the Kyebi Circuit Court in the Eastern Region on Wednesday December 1, 2021, was arrested on Monday when he went to the Kyebi Police station to seek bail from one of his aides who went to attack a site.

The Kingpin's aide among others currently at large, last week went to the Teacher Mante area and allegedly demolished an ongoing beverage factory that is under construction.

The suspect, “One Million” with his gang, some month ago, reportedly went to Adesso and attacked some farmers after taking over their lands to fetch sand on it.

It took the intervention of the Okyeman Environmental Taskforce to fight them back, however, they managed to overpower the task force but the police later came to their aid.

The land guards reportedly collapsed the said factory on the claims that the said land belongs to the suspect, “One Million” which was leased by the Okyenhene, Osagyefuo Amoatia Ofori Panin to the investor.

However, the said investor, name withheld, reportedly went to the Okyenhene palace to report the matter of the land guards’ attacks on his factory, in which the Okyeman Taskforce rushed to the site and arrested one of the suspects.

The investor explaining his ordeal to DGN said, “We wanted to build a beverage factory latest by February 2022, so we purchased land from the Okyenhene, Osagyefuo Amoatia Ofori Panin but unfortunately for us, anytime we try building the factory, supposed land guards collapse the building for reasons best known him. He has collapsed the building 13 times”.

According to the Investor, he has a document that shows the land belongs to him having purchased it from the Okyenhene, but information gathered from the land guard indicates the land has been given to Goil.

He said, they have spent a whopping GHC300,000 on the project but it remains a standstill which has become a worry to him.

He expressed, ” The land guard told me he has control over lands in the area and that, no chief in Kyebi can step up to challenge his decision since he has absolute power over lands in Teacher Mante” he stated.

Explaining the arrest of the land guard he said, “We decided to arrest him for collapsing the building, he use to do it at night but this time around he did it in the daytime. We reported the incident to Osagyefo Amoatia Ofori Panin so he sent his taskforce here to arrest them”.

Meanwhile, Baffour Asiedu Bekoe, the head of the Okyeman Taskforce also confirmed that the said land in Teacher Mante is documented and has been given to the investor who intends to build a beverage factory in the area.

He emphasized that no individual has power over any land in the Okyeman enclave and has vowed to deal with land guards in the area.

“I want to caution the public, if you have a land which is not properly documented, you have to visit the Palace for proper documentation because when caught by the taskforce you will be dealt with. The Taskforce deals with documents and nothing else. Any land in Okyeman belongs to Okyenhene and no one can sell the property of Okyeman” he stated.