Reducing malnutrition and child deaths: The magic of UNICEF and China-Aid intervention in North East Region 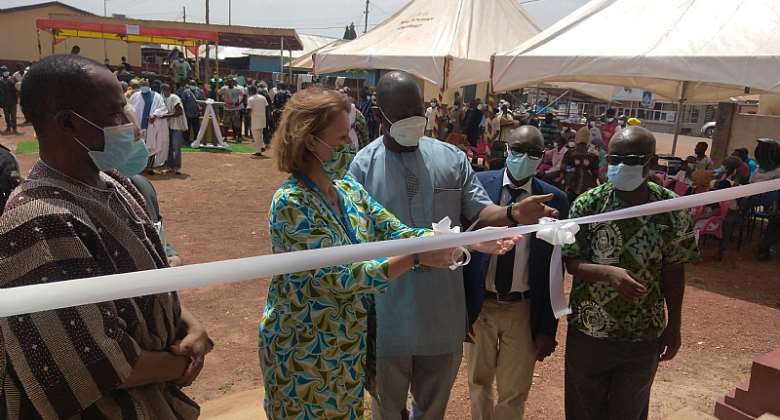 WHO says around 45% of deaths among children under 5 years of age are linked to undernutrition. These mostly occur in low- and middle-income countries. At the same time, in these same countries, rates of childhood overweight and obesity are rising.

In Africa, it is reported by WHO that Sub-Saharan Africa had the highest neonatal mortality rate in 2018, recording 28 deaths per 1,000 live births. Research also revealed that the risk of a child dying before completing the first year of age was highest in the WHO African Region (52 per 1000 live births)

In Ghana, undernutrition is still threatening the survival and development of young children, and accounts for approximately 24% of child deaths and stunts children’s growth and cognitive development.

According to the multiple indicator cluster survey 2017, in the Northeast region, stunting (being too short for age) among children under five years stood at 29 percent as compared to the national average of 18 percent.

Wasting (being too thin for age) is estimated to be around 9 percent more than the national figure of 7 percent.

He said economic difficulties, reduced food supply and spikes in food prices on the market after the lock-down period, threatened to derail the progress made to improve the nutrition of children.

He noted that before the UNICEF /CHINA-AID, health facilities in the region were challenged with logistics such as weighing scales and stadiometers.

"Most children could not receive some of these basic services, especially length/height, as a result of this, making it difficult to monitor the height of children who visited the child welfare clinic. Again, children whose growth were detected to be problematic and becoming malnourished could not be treated with the recommended Ready-To-Use Therapeutics Food (RUTF) due to its unavailability in the region for the same time," he said

Children who suffered from childhood disease and needed urgent attention were referred to the Tamale Teaching Hospital (TTH) and others nearby for treatment.

In March 2020, UNICEF Ghana in collaboration with the China-Aid launched a project titled " Fighting COVID-19 by Providing Health and Nutrition Service to Women and Children in North East Region" to strengthen the availability and supply chain for essential health and nutrition commodities and health facilities.

Under the project, five Newborn Care Units have been established by UNICEF to boost healthcare services for newborn babies in the region.

Also, 70, 276 boxes of micronutrient powder, 40, 760 packs of Iron Folic Acid supplements and 2, 109 packs of Vitamin A supplement were procured to and distributed to health facilities and communities to help fight malnutrition.

"The project I must say was very timely because it came when the new region had started functioning fully and needed all the support it could get," Dr. Abdulai told the writer.

After the project started in March 2021, a total of 1,126 children with varying degrees of malnutrition were reported at the Out Patient Care unit (OPC) out of which 431 were successfully cured with 187 cases recorded at the In Patients Care (IPC) unit with 148 treated and discharged in September 2021.

"In order to equip health staffs with the capacity to distribute the powers, 180 of them were trained on the use," Dr. Abdulai stated. "2,500 children between the ages of 6- 23 months have benefited."

During a visitation to some of the facilities by UNICEF team and pressmen, beneficiaries who spoke to the media at the Gambaga Hospital said they observed positive changes in the babies.

Madam Bichole Elizabeth, a mother of a one and a half-year-old girl said her baby was not weighing well, but after the intervention, the child weight increased tremendously.

"My name is Bichole Elizabeth, when I gave birth to my child, they told me not to give her water until she is 6 months. So I practised exclusive breastfeeding, when it was time for him to start taking additional food, they started giving me the Nutrition supplement.

"First my child was not doing well, but now, she is very fine.

"They encouraged me to do exclusive breastfeeding, and when my child reached 6 months, they started giving me the supplements. I usually add it in his porridge age, and about 7 months now, and my child is very fine" another mother and beneficiary," Madam Laary Bisundam told this writer.

Between March and September 2021, a total of 21 acute and chronic Malnutrition cases were recorded at the In Patient Care Unit (IPCU) at the facility. Out of this number, 8 patients were cured and discharged with 9 of them referred to the Nalerigu Baptist Hospital for further treatment and 4 still on admission.

"The intervention came somewhere in March this year, and since then, we had 21 cases of acute malnutrition, with that we treated 8, and referred 9. Currently, 4 are still on admission," a nurse at the Gambaga hospital stated.

Pib-Rana, Naa Daa Kolgu Ma-Mmaara Banzua (II) the paramount chief for the Pib Traditional area in the Bunkpurugu-Nakpanduri District, delivering a speech at the commissioning of the Newborn Care Unit at Bindi Hospital, thanked UNICEF Ghana and China-Aid for the support given the people in the area.

He noted that the hospital had challenges handling neonatal cases, but added that the construction of the Newborn Care Unit would ease the suffering of parents and health workers.

"I wish to on behalf of the people in the area thanked UNICEF Ghana for these gestures, I know this is not the only thing UNICEF is doing for the area, and for this, we say thank you," he stressed.

Dr. Anthony Asare, a physician assistant and a clinician who heads the Gambaga Medical Center in an interview, lauded the project but mentioned lack of drugs, inadequate staff, and lack of means for transportation as some of the challenges facing the facility.

"Our major challenge has to do with the flow of drugs, the regional medical center runs a system that prevents the regular flow of drugs to the facility, and that is affecting us a lot. Another problem is lacked transportation, as a facility we don't have any car," he lamented.

In all, four Newborn Care Units have been provided for the North East Region to help fight newborn deaths. Beneficiary communities include Walawale Hospital, Bindi Hospital, Cheriponi hospital, and Yagba-Kubori hospital to reach out to 267,059 women, children and adolescents.

Honourable Yidana Zakaria, the North East Regional Minister in an interview with the writer, while thanking the government of China and Unicef Ghana, pledged the support of the Ghana government to the welfare of children and women in the region.

"Let me thank you(UNICEF ) and the people of China for the support we got, but I wish to state that as government, we are also doing our bit to promote health care for our people," Mr. Yidana said.