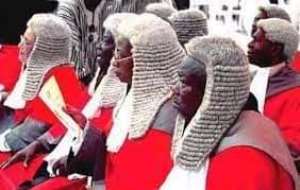 This must be one of the most peaceful litigations ever recorded in Ghana’s history or is it propaganda by the media not to make the public aware of the proceedings? Or maybe they are just not interested?

Tomorrow 30th November 2021, the Supreme Court Ghana is sitting on the matter. Is it not surprising considering the might of Akwamu State. The litigation is not over until the Supreme Court of the land declares so, we are confident that looking at the history of Akwamufie which is known by many. The rightful and needful will be done, we believe in the justice system he said.

The Yaa Ansah and the Yaa Botwe families of Akwamu were embroiled in a chieftaincy dispute following the demise of the Akwamuhene, Odeneho Kwafo Akoto II, in 1992.

Even though the immediate past occupant of the Akwamu Stool, Nana Ansah Sasraku, had acted as Omanhene and ruled for 18 years under seeming calmness, the installation of the current Akwamuhene, Odeneho Kwafo Akoto III, who is from the Yaa Botwe Family, deepened the cracks of misunderstanding, as his legitimacy was challenged by the Yaa Ansah Family.

After a “thorough screening of all facts and evidence provided”, the Judicial Committee of the Eastern Regional House of Chiefs, on Wednesday, May 10, 2017, affirmed the legitimacy of Odeneho Kwafo Akoto, which definitely didn’t go down well with the “Custodians” the Yaa Ansah Family, as such proceeded to the Supreme Court, since March 2020.

Hottest Photo Reports
Catch up with all the political quotes from our politicians.
Advertise here
More Article
ModernGhana Links
The burden of communicable diseases in Africa: Nigerian perspective
Lindiwe Sisulu: trading on a famous South African surname has its limits
How COVID is affecting school attendance in South Africa: piecing together the puzzle
Kwasi Wiredu cleared the way for modern African philosophy
Crucial Clues to HIV Behavior in the Congo Basin: How We Crack Its Complex Code
Will the Horn of Africa become a region of strategic rivalry between the United States and China?
Another coup has been averted in Burkina Faso: but for how long?
When Social Justice is reached, Dr. King’s dream is realized
Airline tie-up for Kenya and South Africa: possible rewards, and risks
TOP STORIES