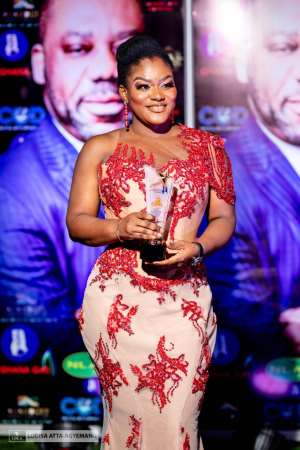 The President of the Young Democrat Union of Africa has been honoured at the just ended GUPS PRO Awards, held on Friday, 26th November 2021 in Accra.

H.E Louisa Atta-Agyemang received the coveted award for the Most Outstanding Female Youth Leader Of The Decade for her tremendous contribution to youth leadership both nationally and internationally.

In her remarks, the President of the continental youth group charged young people especially women to take the issue of female empowerment serious and move from rhetorics to action, “ we have to ourselves an opportunity to build a future that truly represents all, regardless of your gender or what society limits you,” she added.

The celebrated youth leader expressed appreciation to the organizers.

H.E Louisa Atta-Agyemang is celebrated for her feat as the first and only female President of the Ghana Union of Professional Students, from where she rose to become General Secretary and Acting President of NUGS.

In her current role as President of the Young Democrat Union of Africa, she recently led the continental union to honour the President of Malawi during a courtesy call on him, which drew a lot of commendation from around the continent and globally.

The maiden GUPS PRO Awards was organized to recognise the efforts of members of the Ghana Union of Professional Students as well some leading figures in the country whose works are believed to be making wide impact.

Residents of Settlement unhappy over destruction of road in ...
39 minutes ago