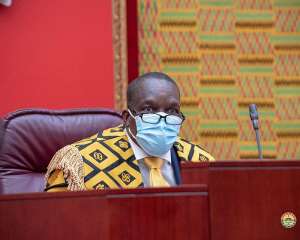 The NPP folks in parliament know there are three arms of government: the Executive, the Judiciary and the Legislative. They know the President, Nana Akufo-Addo is the head of the Executive. They know the Chief Justice, Justice Anim Yeboah is the head of the Judiciary, but they don’t know the Speaker, Hon. Alban Bagbin is the head of the Legislative. He has to constantly remind them of that. They don’t know that if either the President or the Chief Justice comes to Parliament, he will be under the authority of Hon. Alban Bagbin. This is why on November 19, they behaved like children who are left in the house without their parents. They continue to say, the 2022 budget is not rejected as if they didn’t hear it when the Speaker made the rejection announcement.

I wrote an article immediately Hon. Alban Badgin was sworn-in as the Speaker. In that article, I said the lazy way Nana Akufo-Addo has been running the country has come to an end. I stated that those days when Nana Addo will have nothing to do with contracts and budgets sent to parliament for approval was over. As there is a new Speaker in the house, he will have to work by paying attention to the details in the contracts and budgets sent to parliament. It is no more going to be business-as-usual. If he continues to be lazy, he will go into the history books as a failed president.

No matter how the NPP folks will spin it, Nana Akufo-Addo has booked a place in history as a disgraced President whose budget was rejected by the people of Ghana. That should tell you how bad the budget was. They are telling their members that the rejected budget will be passed on November 30, as if their members don’t know their numbers in parliament. This is why Dr. Bawumiah will give them any crap and they will clap for him. He will then laugh at them when he sees them clapping.

The rejection of the budget means Ghana’s democracy is reborn and the victory goes to hard working Ghanaians. It also taught us some few lessons:

1. Nana Addo has lost control of the country and his party. He supervised a budget that his party couldn’t defend. This shows why the country is directionless.

2. The NPP has no leadership in Parliament. When it was time to defend their President’s budget, we saw some low key MPs directing the walk-out. Hon Kyei-Mensah Bonsu and Afenyo Markins followed like zombies.

3. The NPP has no leadership at the party headquarters. At such an important sitting as passing a budget, the Chairman, Gen. Secretary and the Organizers were all missing in their support for the MPs. No wonder, the NPP acted like adults without common sense.

With this rejection of the budget, the NPP has broken their own 8. NDC just need to tell Ghanaians why the budget was rejected in plain language and God being on our side, victory 2024 is assured.