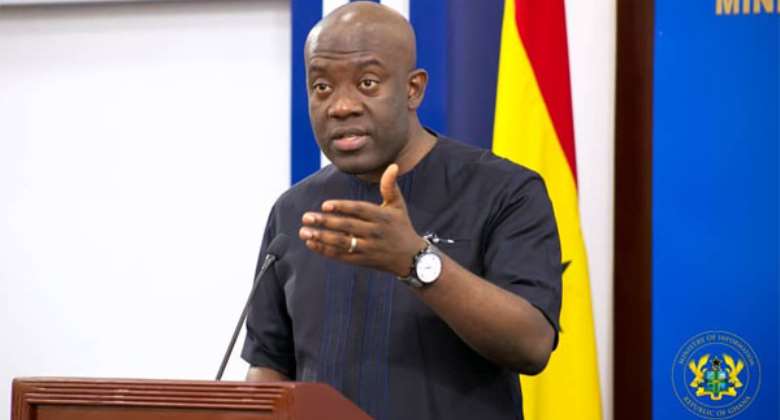 Minister for Information, Kojo Oppong Nkrumah has revealed that anyone who would say the 2022 budget has not been rejected should be hooted at.

Finance Minister, Ken Ofori-Atta, on November 17, announced the country’s plan to introduce a 1.75% levy on all electronic financial transactions including mobile money payments, bank transfers and merchant payments from January to widen the tax net.

At the Parliament on Friday to approve the budget, the Majority MPs staged walk out after accusing the Speaker of bias.

In their absence, a vote was conducted and the opposition rejected the budget.

Speaking in an exclusive interview on Germany-based Ghanaian radio station; Fresh Radio Online, the Information Minister Kojo Oppong Nkrumah without mincing words stated that the 2022 budget has never been rejected.

According to the Information Minister, anyone who would say the 2022 budget has been rejected should be hooted at.

He explained that, "When we say Parliament, it is not the building nor is it the Speaker...When Parliament is taking decisions. One or two persons can not sit in the Chamber in the Parliament House and make a decision. It is at least 138 parliamentarians to decide. Even if it's 137 people in the Chamber their decisions would be void."

Kojo Oppong Nkrumah explained extensively to the host of the show that, "It was the Speaker and his NDC Parliamentarians who rejected the budget...nothing has really happened...Ghanaians should stay calm ....Tuesday we shall go to Parliament and revisit the issue."