Court issues warrant for arrest of Xavier Sosu for 'disrespect' 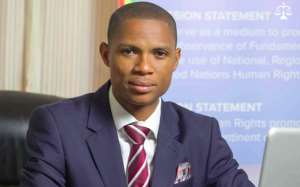 The Kaneshie District Court on Monday morning has issued a bench warrant for the arrest of the Madina MP, Francis-Xavier Sosu.

But according to correspondence from the court outlining the exchanges between the Madina MP’s lawyer and the prosecution in the case, the prosecution feels the warrant is necessary because the MP is showing disrespect to the court by being absent.

Mr. Sosu’s lawyer, however, said the MP was involved in work for the Constitutional and Legal Committee of Parliament, which has resumed public sittings on the anti-LGBTQ bill.

Mr. Sosu is facing these legal challenges after he led a demonstration in his constituency to protest bad roads on October 25.

The police contended that the protest included some unlawful acts, hence an attempt to arrest the MP.

What's the big deal if military is withdrawn from Speaker Ba...
20 minutes ago

Bogoso explosion: 500 houses blown into pieces at Appiatse
22 minutes ago