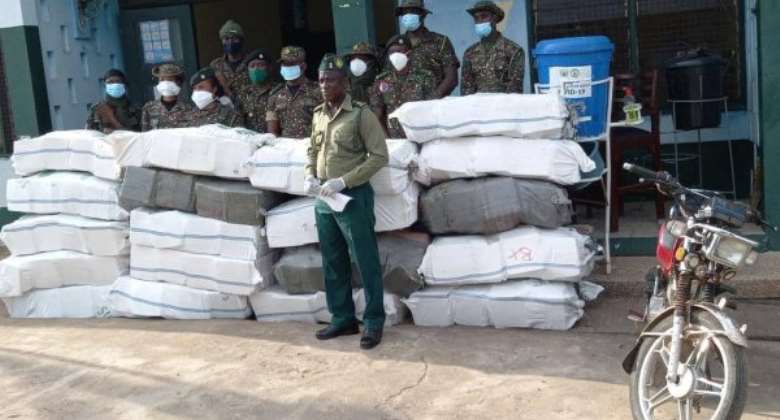 The Nyive Sector Command of the Ghana Immigration Service (GIS), has intercepted 1,490 parcels of suspected Indian hemp aka 'wee' in the Atikpui community in the Nyive border enclave.

The compressed square-shaped parcels had inscriptions such as "3", "BX", "Boss", and "5" on them.

Chief Superintendent Abdulai Zakaria, Nyive Sector Command of the Service, said the sacks were intercepted at about 0000 hours of Sunday, November 28, based on surveillance and monitoring that they did.

He said they moved swiftly to the spot, which made them intercept the "gargantuan" parcels.

Chief Superintendent Abdulai said as they picked the goods and were about to leave the community, some folks of the community began to advance towards them, which led them to discharge warning shots to disperse them.

He explained that when the officers got to the spot, the goods were waiting to be transported, adding that, the suspects took to their heels to neighbouring Togo when they sensed the presence of the officers.

Chief Superintendent Abdulai said it was suspected that an unregistered "Royal" branded motorbike found at the spot was used to escort the goods.

He said it was the second time a consignment of the sort was intercepted within the Command and warned that people engaged in such illicit business would be followed wherever they went.

Chief Superintendent Abdulai urged the public to volunteer information and assured that their confidentiality would not be disclosed.

He praised the Municipal Chief Executive, the Chiefs, and the entire community as well as sister agencies for their cooperation.

Assistant Inspector, Mr Felix Klu-Adjei, Volta Regional Public Relations Officer of the Service, told the Ghana News Agency (GNA) that communities must understand the relevance of the operations of GIS at the various border posts in ensuring solid security and the protection of the country against eminent terrorism and organised crime.

The confiscated parcels were handed over to the Head of the Narcotics Control Board (NACOB) in the Region.