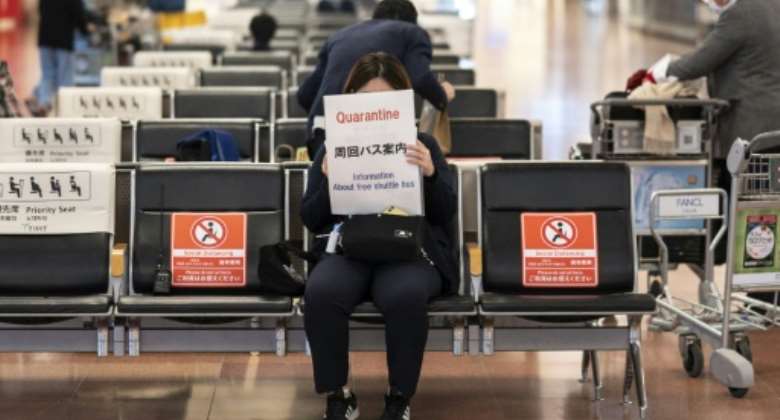 Japan has announced plans to shut its borders to foreign nationals over the Omicron variant, joining a growing list of countries erecting virtual fortresses against the mutated new strain. By Charly TRIBALLEAU (AFP)

Japan announced plans Monday to bar all new foreign travellers over the Omicron variant of Covid-19, joining a growing list of countries trying to erect virtual fortresses against the heavily mutated new strain.

G7 health ministers are set to meet later in the day to discuss the new strain -- first detected in South Africa -- and the fresh challenge it poses to global efforts to battle the pandemic.

The Japanese government has become the latest country to reinstate strict border controls that many had hoped would be a thing of the past, barring all new foreign arrivals just weeks after announcing it would finally allow some visa holders to enter the country.

Prime Minister Fumio Kishida said the country was "in a stronger position against the Omicron variant than other countries," citing voluntary mask-wearing and self-restraints about risk behaviours.

The Philippines also said it would temporarily suspend plans to allow fully vaccinated tourists entry, in a bid to prevent the variant taking off in a country where most of the population remains unvaccinated.

Manila had hoped to revive the country's battered economy by allowing jabbed tourists entry as of Wednesday.

The variant is also throwing a tentative opening-up into doubt in Australia, where the government is now reconsidering plans to relax border restrictions further in just two days.

But with three Omicron cases confirmed in people flying into Australia from southern Africa -- two landing in Sydney and one in the northern city of Darwin -- Prime Minister Scott Morrison appeared reluctant to re-impose the kinds of strict lockdowns seen earlier this year.

Much of the uncertainty surrounds just how infectious Omicron is and how resistant it is to existing vaccines.

The prestigious Bambino Gesu hospital in Rome on Sunday released the first "image" of the new strain and confirmed there were many more mutations than seen in the Delta variant, though said that does not mean it is more dangerous.

despite the new threat, tens of thousands rallied in Austria to protest the government's introduction of compulsory vaccination -- the first EU country to do so. By GERT EGGENBERGER (APA/AFP)

But European Commission chief Ursula von der Leyen said Sunday governments faced a "race against time" to understand the strain and that vaccine manufacturers needed two to three weeks "to get a full picture of the quality of the mutations".

A long list of countries have already imposed travel restrictions on southern Africa, including key travel hub Qatar, as well as the United States, Britain, Brazil, Indonesia, Saudi Arabia, Kuwait and the Netherlands.

Israel has announced some of the strictest curbs, closing the borders to all foreigners just four weeks after reopening to tourists following a prolonged closure.

Angola on Sunday became the first southern African country to suspend all flights from its regional neighbours Mozambique, Namibia and South Africa.

South Africa has strongly protested the new restrictions, with its foreign ministry claiming it is being "punished" for first identifying a strain that has now been detected everywhere from the Netherlands to the UK, Canada to Hong Kong.

President Cyril Ramaphosa on Sunday urged countries to lift the travel bans "before any further damage is done to our economies", while his counterpart in Malawi, Lazarus Chakwera, accused Western countries of "Afrophobia" for shutting their borders.

The head of the World Health Organization in Africa also urged countries to follow the science rather than impose flight bans in a bid to contain the new Covid strain.

But in a sign of optimism, Singapore and Malaysia eased coronavirus travel restrictions on one of the world's busiest land borders after nearly two years.

Many countries have reinstated strict border controls many had hoped would be a thing of the past in response to the strain. By William WEST (AFP)

As of Monday, vaccinated citizens, those holding permanent residency status and work permits can cross the one-kilometre (0.6-mile) causeway separating the countries without having to quarantine.

And despite the new threat, tens of thousands rallied in Austria to protest the government's recent introduction of compulsory vaccination -- the first EU country to do so.