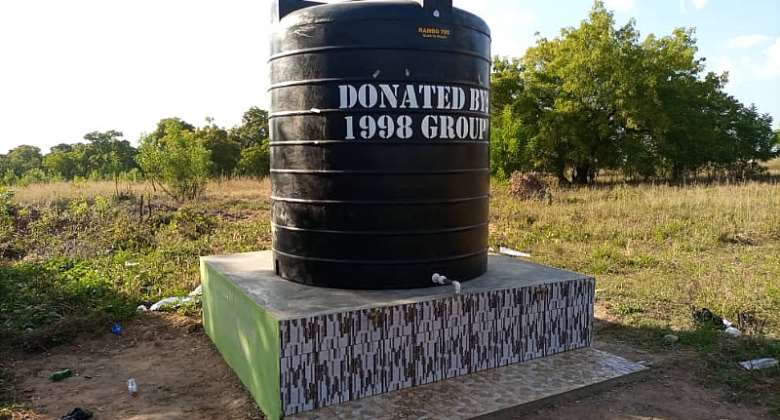 As part of activities to commemorate the 50 years Anniversary of the Damongo Senior High School (Dass), the 1998 year group has commissioned a mechanized borehole for the school.

This they believe would go a long way to ameliorate the agelong plight students go through in accessing portable water for school chores.

Funding for the project valued at Ghc10,254.00 was sourced after the members of the year group adopted a resolution on their Watsapp platform to raise funds from among themselves to realise their dream of giving back to the school community.

In a speech read on behalf of the year group, Adam Zackariah glorified the Almighty God for bringing the initiative to reality.

He disclosed that the idea to mechanise the borehole for the school was first mooted on the year group Watsapp platform sometime in January 2021, by one of their members, Brutus Kofi Sarpong, a one-time National Service Personnel of the school.

A delegation led by Sulemana Asuma met the then Headmaster of the school,Abubakari Salia to further consolidate and harmonise their intended desire to mechanise a borehole facility for their Alma Mata.

The "old bone" said but for unity of purpose,the initiative wouldn't have seen the light of the day.

Special appreciation was expressed to Chairman Yakubu Mumuni,Alhaji Alhassan Sulemana,Madam Sadia Aminu and Mr. Abass Azumah for the exceptional financial contributions they made towards the project among others.

The group also extended their profound gratitude to the the senior prefects of their time: Dennis Faruk,Attah Mukaila and Adam Zack for their continuous unique leadership roles and coordinated efforts in keeping the spirit of the group alive.

Tributes were poured out to Adam Soale of blessed memory for creating the year group platform and bringing members together.

The group hinted of more of such projects in the coming years.

What's the big deal if military is withdrawn from Speaker Ba...
46 minutes ago

Bogoso explosion: 500 houses blown into pieces at Appiatse
48 minutes ago