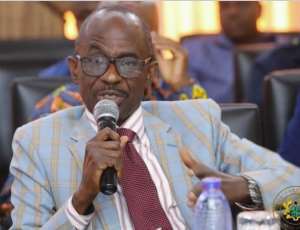 When it comes to throwing garbage's to the public domain, then, I can boldly say NPP party is good at that.

The NPP presented an empty budget to frustrate the already frustrated Ghanaians as a result of Covid-19 pandemic. Many private workers lost their jobs, others are on the streets whiles others are at home, but here comes 2022 budget. it sounds weird that after other forms of tax payments are used to pay taxes to the government, Nana Addo, Bawumia and Ken Ofori have the urge to asked Ghanaians to pay MoMo tax again, hmmmm!

The 2022 budget which was rejected by parliament in the late hours of yesterday was not only empty but carries huge burdens, frustrations, malicious, agony or afflictions to Ghanaians, it is good the budget was rejected by our workaholic MPs.

This clearly shows how callous the NPP government is.

We must continue to trumpet home how the NPP government is trying hard to rob Peter to pay Paul at all cost.

I hope both NDC and NPP have now come into terms that Nana Addo/Bawumia and Ken Ofori are scammers, daylight robbers and fraudsters, they are more than armed robbers but just that, they are using pen to steal instead of gun.

We must continue to let Ghanaians know that after huge borrows and many attempts by Nana to sell-off our golds has failed, they have mastered another strategies to steal. This time, it is called MoMo Tax.

Nana Addo and Bawumia said in 2016 that we have money in the country and so their government won't bothered Ghanaians with taxes. Where is the money?

Ghanaian workers who the Nana Addo /Bawumia led NPP government disregarded and deliberately gave them ONLY 4% increment on their salary, are again expected to pay E-Levy on their meagre salary after paying huge taxes already on that meagre which hardly put 3 square meal on the table for their family.

...because any worker who goes to cash with his 🏧 card, or withdraw cash onto his momo, the person would be tasked 1.75%, anytime he withdraw money or sends money through MoMo, he or she pays 1.75% also, so you see Nana Addo/Bawumia and ken Ofori have considered Ghanaians as stupid.

A big thank you goes to:

You will receive your rewards here on earth and in heaven for standing in for the entire Ghanaians, we are proud of you.

Finance Minister announce transactions to be excluded from E...
8 minutes ago