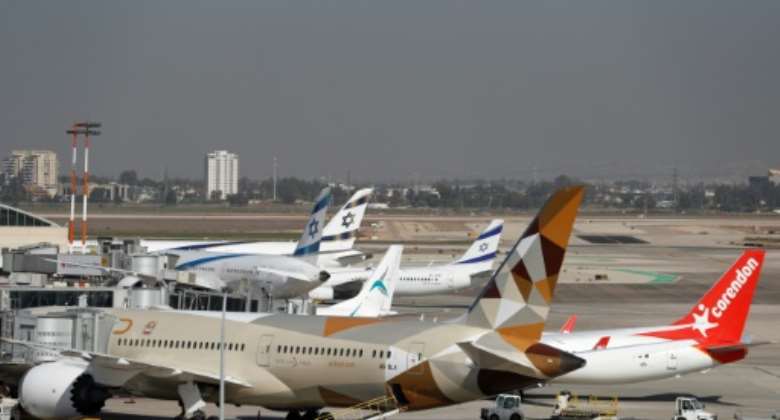 Israel announced some of the strictest curbs, closing the borders to all foreigners. By Ahmad GHARABLI (AFP)

A new, heavily mutated Covid-19 variant spread across the globe on Sunday, shutting borders and renewing curbs as the EU chief said governments faced a "race against time" to understand the strain.

Dubbed Omicron, the strain, first discovered in southern Africa, has cast doubt on global efforts to battle the pandemic amid fears that it is highly infectious, forcing countries to reimpose measures many had hoped were a thing of the past.

"We know we are now in a race against time," European Commission chief Ursula von der Leyen said, adding that vaccine manufacturers needed two to three weeks "to get a full picture of the quality of the mutations".

Morocco said it was halting incoming flights for two weeks from Monday.

South Africa's President Cyril Ramaphosa on Sunday called on countries to "urgently reverse their decisions and lift the travel bans "before any further damage is done to our economies".

The head of the World Health Organization in Africa also urged countries to follow the science rather than imposing flight bans in a bid to contain the new Covid strain.

Dutch health authorities said they had identified at least 13 cases of Omicron among 61 quarantined passengers who tested positive for coronavirus after arriving from South Africa.

Despite the worldwide alarm, in Austria tens of thousands rallied to protest against the government's introduction of compulsory vaccination -- the first EU country to do so.

Tens of thousands rallied in Austria to protest against the government's introduction of compulsory vaccination. By GERT EGGENBERGER (APA/AFP)

With many European nations, including Germany and France, already bringing back curbs to counter surges in infections, Swiss voters firmly backed a proposed Covid pass law in a referendum on Sunday.

Mask-wearing will again be mandatory in shops and on public transport in England. And all arriving passengers will have to take a PCR test and self-isolate until negative.

As scientists race to determine the level of threat posed by the new strain -- particularly whether it can evade existing vaccines -- a South African doctor said dozens of her patients suspected of Omicron infection had only shown mild symptoms such as fatigue.

Angelique Coetzee, chair of the South African Medical Association told AFP she had seen 30 patients over the past 10 days who tested positive for Covid-19 and who all fully recovered without hospitalisation.

Israel announced some of the strictest curbs, closing the borders to all foreigners -- just four weeks after reopening to tourists following a prolonged closure due to Covid.

Health officials in Australia said they had detected the Covid Omicron strain for the first time. By William WEST (AFP/File)

But the new strain has already slipped through the net, and has now been found everywhere from the Netherlands to the UK, Denmark, Hong Kong to Australia, where authorities Sunday said they had detected it for the first time in two passengers from southern Africa who were tested after flying into Sydney.

Britain, currently chair of the G7 group of nations, called an emergency meeting for Monday to discuss the latest Covid crisis.

Scientists in South Africa said they had last week detected the new variant with at least 10 mutations, compared with three for Beta or two for Delta -- the strain that hit the global recovery hard and sent millions worldwide back into lockdown.

The prestigious Bambino Gesu hospital in Rome produced the first "image" of the new strain and confirmed that there were many more mutations than seen in the Delta strain.

However "this does not automatically mean that these variations are more dangerous, just that the virus has further adapted to the human species by generating another variant", the researchers said.

The speed at which governments slammed their borders shut took many by surprise, with travellers thronging Johannesburg international airport, desperate to catch the last flights to countries that are imposing sudden travel bans.

The variant has also revived geopolitical fault lines exacerbated by the pandemic, with the US quick to hail South Africa's openness -- a thinly veiled jab at China's handling of information about the original Covid outbreak.

US Secretary of State Antony Blinken on Saturday "praised ... South Africa's government for its transparency in sharing this information, which should serve as a model for the world".

Looking ahead, World Health Organization member states reached a consensus Sunday on kick-starting the process towards creating a pandemic treaty setting out how to handle the next global health crisis.

You have collapse the economy, now you want us to pay E-Levy...
35 minutes ago