Why NDC cannot be trusted to redeem Ghana 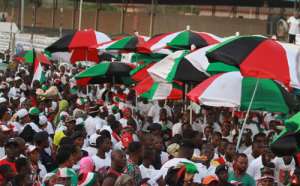 If you may recall, prior to the 2008 and 2012 general elections, Ex-President Mahama and the NDC gave a slew of Manifesto promises to the good people of Ghana, but as to whether they managed to honour those promises, is a million dollar question.

In fact, there have been numerous NDC’s broken Manifesto promises in the past, but the one that will long be stencilled on discerning Ghanaians mental sheets, is the one-time NHIS premium.

The NDC’s ‘sugar puffed’ Manifesto promise of one-time NHIS premium, so to speak, was destitute of honesty and integrity.

It was a vote increase stratagem, obviously, coated with sweeteners to feed the good people of Ghana.

Having stencilled such appalling record on my mental sheet, I took the NDC’s 2020 flagbearer, former President Mahama’s promise of free primary health care if voted into power in 2020 with a pinch of salt.

We cannot, however, ignore or deny the fact that governance is dynamic, and therefore it is impossible for political parties to honour all their Manifesto promises while in government.

However, it is extremely nauseating to keep hearing unrealistic promises from the same people every four years with the view to hoodwinking the voting public.

Ironically, however, the NDC loyalists have been accusing the New Patriotic Party operatives of lying their way to power by giving unrealistic Manifesto promises during the 2016 and 2020 electioneering campaigns.

It would, therefore, appear that the 2016 and 2020 humiliating general elections defeats have unsettled the nerves of the NDC loyalists, judging from their weird posturing.

If you would remember, during the 2008 and 2012 electioneering campaigns, Mahama and NDC gave a myriad of Manifesto promises, among other things, one-time NHIS premium, free SHS, ‘making dumsor a thing of the past, putting money in Ghanaians pocket, creating more jobs for the jobless, stabilising the economy, protecting Ghanaians from the menaces of galamsey and Fulani herdsmen, bringing an end to dubious judgement debt payments, fighting the rampant bribery and corruption, amongst others.

Nevertheless, after giving all those richly interesting, albeit unrealistic promises with a view to deceiving the voting public for their mandate, the NDC government, led by former President Mahama, as expected, wilfully failed to honour the promises, and, consequently, a total of 55.6% (44.4% for Mahama) of the electorates rightly voted them out of power in 2016 and retired Mahama in 2020.

The overarching question then is: what will make the unhappy 56% of electorates change their mind and repose their absolute trusts in Mahama in the near future, given the encouraging signs of auspicious economic growth under the Akufo-Addo’s leadership?

If you would recollect, prior to the 2008, 2012 and 2016 general elections, the then presidential candidate, Nana Akufo-Addo, made the Free ‘SHS’ his principal campaign message. As it was expected, the opposition NDC communicators scoffed and labelled him an inveterate liar.

Astonishingly, however, some unsuspecting Ghanaians, including my maternal uncle, Oliver, bought into the NDC’s manipulating gimmicks and rejected the handsome offer of the Free SHS on two previous elections (2008 and 2012 respectively).

But lo and behold, discerning Ghanaians saw the light and gave the Free SHS provider, Akufo-Addo the mandate on 7th December 2016.

And, true to his word, President Akufo-Addo has honoured his promise of the free SHS to the delight of the vast majority of Ghanaians.

Let us be honest, the implementation of the Free SHS is the prudent way of distributing the national resources. It really epitomises a true leadership.

Despite the extent of the economic mess left by the Mahama’s government, the Akufo-Addo government is prudently taking steps to stabilising the economy.

To be quite honest, some of us, as a matter of principle, could not end our fury in condemnation when former President Mahama bizarrely doled out large portions of our scarce resources to inveterate apologists like the founder of Ghana Freedom Party (GFP), Madam Akua Donkor, who in all honesty, contributed nothing meaningful towards Ghana’s wellbeing.

Ghana, so to speak, does not need a Father Christmas who would carelessly give away our hard earned resources to apologists. But Ghana rather needs a serious, a committed and a forward-thinking leader who can utilise our scarce resources judiciously to the benefit of all Ghanaians.

Considering the enormous benefits therein education, it is, indeed, prudent and somewhat forward-thinking for any serious and committed leader to seek to bridge the ever widening social inequalities gap through the rational distribution of national resources in the form of free SHS and other social interventions.

Yes, we, (Ghanaians), took the right decision on 7th December 2016 and 2020 by electing ‘the Moses’ of our time (Akufo-Addo) to rescue us from the economic bondage of the ‘Pharaoh’ of our time (Mahama).

Residents of Settlement unhappy over destruction of road in ...
34 minutes ago