Galamsey 'madness' Breaks Out In Brazil 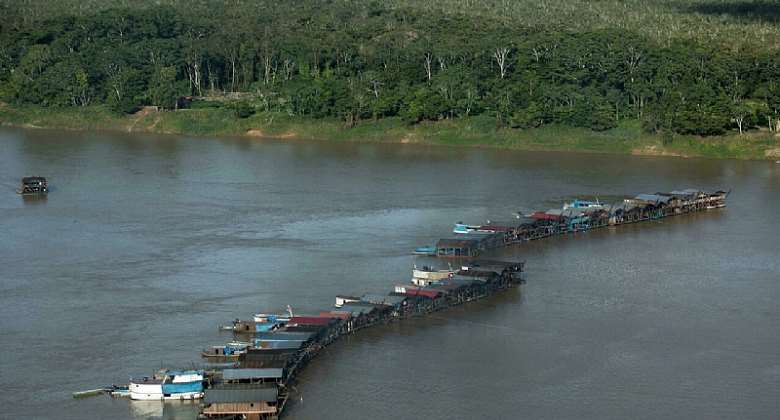 K1 – KOO. You are my witness! Have I not always maintained that galamsey is like a mad disease.....

K2 – Oh c'mon! Let's have some peace. You're not going to bore man again with this galamsey-galamsey- obsession of yours?

K1 – “Bore man”, you say? When you have to import water from Qatar or Abu Dhabi, then you will know what the word “bore” means!

Abu Dhabi? Doesn't Abu sound like a name in Ghana? And doesn't “dabi” have several meanings in Twi? Dabi means “NO”! Right?

Yes! When we're forced to go there to buy water, they will tell us: “Dabi! Yenni nsuo ma Ghanafo!” [No, we have no water to sell to Ghanaians.] “Nkwaseafo, mofiri kwaem rebeto nsuo wo desert ha? Momfa mo gyimie mfiri ho!” [Idiots! You come from the rain-forest to buy water from us here in the desert? Take your stupidity elsewhere!]

I believe so. As in “Dabi na mobehunu!” [It's some day you'll realise what you're doing!]

Now, my linguistic paddy-man, what has suddenly loosened the strings to the

language photons in you hippocampus? Oh don't bother to tell me. I have Google here!”

Ha! I knew you'd be able to crack the biological code. Listen, the London Guardian has published an article that tells us that the galamsey craze has struck Brazil in a very big way. Here. Listen:

QUOTE: ‘It’s as if we’re in Mad Max’: warnings for Amazon as gold-mining dredges occupy river

“Environmentalists are demanding urgent action to halt an aquatic gold rush along one of the Amazon River’s largest tributaries, where hundreds of illegal gold-mining dredges have converged in search of the precious metal [gold]. The vast flotilla – so large one local website compared it to a floating neighbourhood –began forming on the Madeira River earlier this month after rumours that a large gold deposit had been found in the vicinity.

“Danicley Aguiar, an Amazon-based Greenpeace activist who flew over the mining flotilla, said he had been stunned by the magnitude of the illegal operation, unfolding just 75 miles east of the city of Manaus. “We’ve seen this kind of thing before in other places – but not on this scale,” Aguiar said of the hundreds of rafts he saw hoovering up the Madeira’s riverbed near the towns of Autazes and Nova Olinda do Norte. “It’s like a condominium of mining dredges … occupying pretty much the whole river.”

Aguiar added: “I’ve been working in the Amazon for 25 years. I was born here and I’ve seen many terrible things: so much destruction, so much deforestation, so many illegal mines. But when you see a scene like this it makes you feel as though the Amazon has been thrust into this spiral of free-for-all. There are no rules. It’s as if we’re living in Mad Max.”

“There was outrage as footage of the riverine gold rush spread on social media. “Just look at the audacity of these criminals. The extent of the impunity,” tweeted Sônia Bridi, a celebrated Brazilian journalist known for her coverage of the Amazon. André Borges, another journalist whose story helped expose the mining flotilla, tweeted: “We are witnessing, in 2021, a gold-miners’ uprising with all the aggressiveness of the days of discovery.”

“Brazil’s multimillion-dollar illegal mining industry has intensified since the 2018 election of Jair Bolsonaro, a far-right nationalist who backs the wildcat garimpeiros who trawl the Amazon’s rivers and rainforests for gold.

“As many as 20,0000 garimpeiros are …. operating within the supposedly protected Yanomami indigenous reserve in Roraima, one of nine states that make up the Brazilian Amazon. Deforestation has also soared under Bolsonaro, who has stripped back environmental protections and [is] accused of encouraging environmental criminals. Amazon destruction rose to its highest levels in 15 years between 2020 and 2021 when an area more than half the size of Wales was lost.

“Last week the Bolsonaro administration was accused of deliberately withholding new government data laying bare the scale of the deforestation crisis, to avoid international humiliation during the Cop climate summit. In [an] interview, [a] former head of Brazil’s environmental agency Ibama, Suely Araújo, said “It’s hard to believe that this government is going to look after the environment, because they are destroying everything.” UNQUOTE

K2 – HMMMM, Koo, can madness fly through the air from one country to another?

K1 – The evidence is before our very eyes, isn't it? It's just that because Brazil is a bigger country, the scale of the operation seems bigger than our local galamsey. But with our excavators bulldozers and changfans, and above all, the political collusion, it's just as clear as “Dabi” means “No”!

What's the big deal if military is withdrawn from Speaker Ba...
16 minutes ago

Bogoso explosion: 500 houses blown into pieces at Appiatse
18 minutes ago