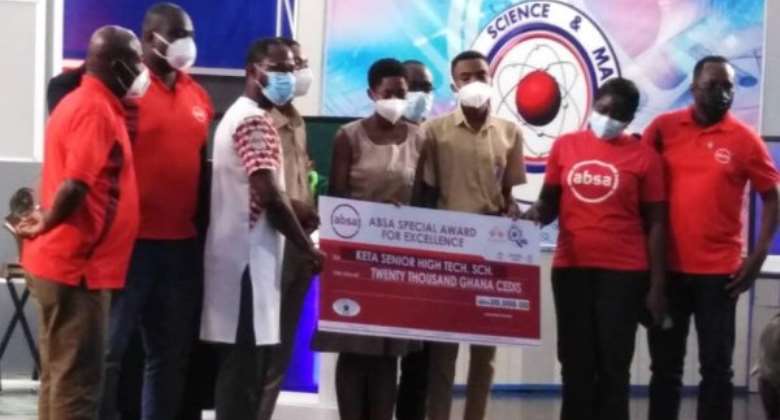 Keta Senior High Technical School (SHTS), the bronze winners in this year's grand finale of the National Science and Maths Quiz (NSMQ), has been commended for placing third in the competition.

The Volta Regional-based school made its debut appearance in the finals of the 27-year-old competition, and in spite of having to compete with some of the well-endowed SHSs in the country, impressed the public.

The school stood toe-to-toe with the likes of Prempeh College, winner of the 2021 contest, which, hitherto, had emerged as four-time champions, and the Presbyterian Boys' SHS, Legon, six-time winners of the event.

“In fact, the Regional Directorate of Education is proud of the determination and tenacity of purpose demonstrated by the school throughout the contest.

This was on the sidelines of the event, held at the Great Hall of the Kwame Nkrumah University of Science and Technology (KNUST, in Kumasi.

Keta SHTS reached the semi-final in last year's event, and its progress to the grand-finale has been applauded by many educationists.

The School was given a cash prize of GH¢50, 000.00, medals, and souvenirs presented by the sponsors of the event.

This year's NSMQ, organized by Primetime Limited in collaboration with the Ghana Education Service (GES), received one of the largest patronages in the history of the 27-year-old contest, generating much interest on many social media platforms.

Initiated in 1994, the competition seeks to create awareness on the essence of studying science and mathematics, especially at the second-cycle level of education.

Ms. Amafuga said the Regional Directorate of Education would not relent in giving the necessary support to the Keta SHTS in the training of students for such competitions to deepen the study of science and mathematics.

Winning the NSMQ title has become one of the greatest achievements of most SHSs in Ghana.

Every year, almost all the schools look forward to participating in the much-touted event and claiming the bragging rights of being national champions.

The cash prize has also increased over the years, and the overall winner of this year's competition, for instance, took home a whopping GH¢80,000.00 as the grand prize.