Time To Take Those Planning To Destroy The Atewa Forest Reserve To The ICC? 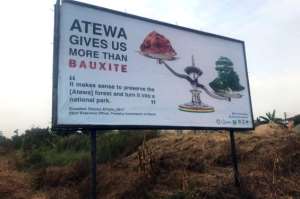 It is pretty hard to fathom why our hard-of-hearing and shortsighted ruling-élites, still refuse to declare the Atewa Forest Reserve, a protected national park from which all mining is banned. Yet, it is a national security issue - which has the potential to lead to the world's first enforced regime-change, for ecological reasons. Amazing.

In light of the continued obduracy of the geniuses into whose grasping hands Mother Ghana has fallen, as a wise and aspirational African people, the question e ought to ponder over is: Has the time not now come, for environmental activist groups, in Ghana, to jointly take the matter of the destruction of the Atewa Forest Reserve (the watershed for three major river major systems - the Densu, the Birim and Ayensu - on which over five million people across Southern Ghana, depend, for for their treated water supplies), to the International Criminal Court (ICC), as a crime against humanity?

The question is: Who should the environmental activist groups name, as the main perpetrators of the abominable, unpardonable and unspeakable act, akin to the despicable crimes committed by yesteryear's worst criminals (in terms of the endless-suffering the destruction of the Atewa Forest Reserve, would cause millions of Ghanaians), such as Hitler, Mussolini and General Franco?

One recommends the dynamic London-based legal NGO, RAID.org, to the Ghanaian environmental activist groups - to give their brief for the mooted case of the committing of a crime against humanity: in the destruction of the Atewa Forest Reserve, to be brought before the ICC, were that unthinkable act-of-lunacy, to occur (God forbid!).

The following individuals and companies (amongst others) come readily to mind:

7) The heads of all the regulatory bodies responsible for the preservation of Ghana's remaining natural capital.